Speaking at the USB Global Technology Conference, Intel data center group vice president Navin Shenoy revealed that the first 3D XPoint based DIMMs are expected to ship in the second half of 2018.

The chip giant believes 3D XPoint DIMMs represent an $8 billion market opportunity by the year 2021. The promise here is the combination of the best features of DRAM and NAND. You get the non-volatile and high storage density benefits of NAND, and performance that should be able to rival DRAM.

Further details about Optane DIMMs can be read at AnandTech. As the site reports, 3D XPoint still needs to mature a lot to make all these promises reality.

The launch of 3D XPoint DIMMs will depend on several pieces coming together. First, Intel's 3D XPoint memory must be sufficiently mature to meet the performance and endurance requirements of DIMM-based usage. Their Optane SSDs have all used a PCIe and NVMe interface that adds substantial latency overhead and makes it difficult to assess how close the underlying 3D XPoint memory can come to DRAM performance levels. The Optane SSDs are also shipping with relatively conservative write endurance ratings relative to the eventual expectations for 3D XPoint products: The Optane SSD DC P4800X's 30 drive writes per day for 5 years is not significantly higher than high-endurance flash-based enterprise SSDs can provide. 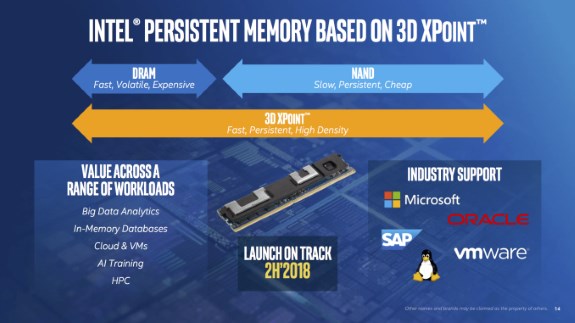