Posted on Tuesday, Dec 19 2017 @ 13:05 CET by Thomas De Maesschalck
Hard disk drive technology is pretty boring these days as solid state disks are so much faster, but it's still nice to see there's some progress going on. Toshiba rolled out a new line of 2.5" enterprise HDDs that feature the highest-capacity to date for models that spin at 10,500rpm.

The AL15SE series uses a dual-port SAS 12Gbps interface and ships in capacities ranging from 300GB to 2400GB. The maximum capacity is 33 percent greater than the AL14SE generation, and these disks have 128MB cache and a latency of 2.86ms. The 300GB model offers data transfer speeds of up to 222.5MB/s, while the other versions offer up to 234MB/s bandwidth.

It seems these disks target a niche datacenter market where they are more competitive in terms of cost than SSDs. Toshiba is no longer expanding its 15k RPM HDD range as those products get beaten by SSDs in terms of cost per gigabyte. 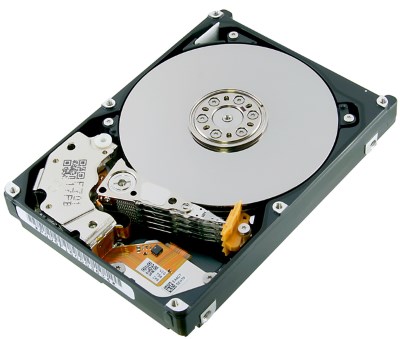 “The 10,500rpm disk continues to be the workhorse of mission critical IT operations,” said Scott Wright, director disk drive product marketing at Toshiba America Electronic Components, Inc. “With Advanced Format models now supporting up to 2,400GB, the AL15SE Series provides a clear path forward for customers who may benefit from higher capacity per spindle for performance-oriented traditional IT, in mission-critical hybrid storage platforms, and in read-intensive applications that may benefit from lower-latency.”

The AL15SE Series features optional Sanitize Instant Erase (SIE) models and leverages Toshiba’s persistent write cache technology for robust data integrity in sudden power-loss scenarios. The models are designed for tier one mission-critical servers and storage systems, including hybrid storage platforms which may benefit from both low-latency and storage capacity up to 2,400GB.