ASRock readies its AM4 motherboards for Ryzen 2000 series

Posted on Thursday, Feb 08 2018 @ 10:30 CET by Thomas De Maesschalck
ASRock rolled out new BIOS updates for most of its Socket AM4 motherboards. VideoCardz received a list and says these ASRock boards now support AMD's upcoming Zen+ (Ryzen 2000 series) processors. Motherboards with Ryzen 2000 support will get a sticker that states "AMD Ryzen Desktop 2000 Ready".

The Bridge BIOS is required to make a smooth transition to Ryzen 2000, that’s only if you happen to buy a 300-series motherboard for your new processor.

The X370 Taichi and Fatal1ty X370 Professional Gaming are expected to get the update tomorrow, on February 9. 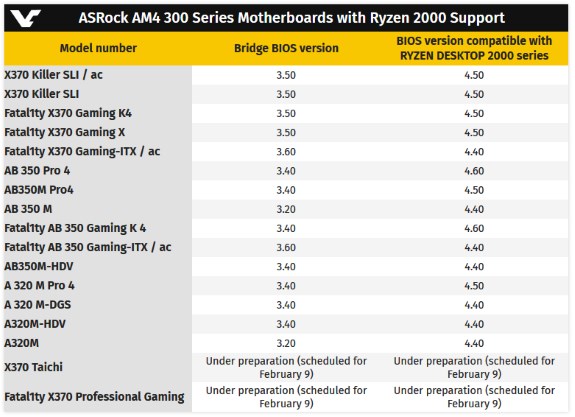