NVIDIA blows it out of the park with stellar Q4 profits

The numbers are wildly better than expected. Analysts anticipated NVIDIA's revenue would be $230 million lower, with earnings per share 56 cents less than what the company just reported! After dropping 4.93 percent earlier today amidst a general market sell-of, NVIDIA shares are currently up 7.52 percent to $233.87.

The chart below provides a look at the quarterly revenue trend. Datacenter GPU sales saw very nice growth last quarter, this revenue is now double as much as one year ago. Gaming also remains incredibly strong, presumably helped a lot by insane demand from cryptocurrency miners. 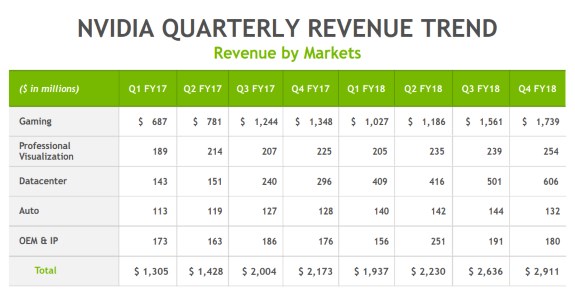 For the current quarter, NVIDIA expects revenue to stay essentially flat at $2.90 billion, plus or minus 2 percent. That's 49.7 percent growth versus last year's record-breaking first quarter.

“We achieved another record quarter, capping an excellent year,” said Jensen Huang, founder and chief executive officer of NVIDIA. “In a powerful sign of our progress, attendees at NVIDIA’s GPU Technology Conferences reached 22,000, up tenfold in five years, as software developers working in AI, self-driving cars, and a broad range of other fields continued to discover the acceleration and money-saving benefits of our GPU computing platform.

“Industries around the world are racing to incorporate AI. Virtually every internet and cloud service provider has embraced our Volta GPUs. Hundreds of transportation companies are using our NVIDIA DRIVE platform. From manufacturing and healthcare to smart cities, innovators are using our platform to invent the future,” he said.