Posted on Monday, Mar 05 2018 @ 13:14 CET by Thomas De Maesschalck
Under the motto better late than never, EK Waterblocks introduced a new RGB waterblock for the AMD Radeon RX Vega video card series. The EK-FC Radeon Vega RGB is a full cover block for the Vega Frontier Edition, RX Vega 64 and RX Vega 56 cards. It has integrated RGB LEDs and is compatible with all RGB sync technologies from motherboard makers as it uses a standard 4-pin 12V RGB LED strip.

EK sells the block for 129.90EUR. For extra style, you can also get a backplate. A black backplate sells for 29.90EUR and a nickel-plated model is offered for 37.90EUR.

The block also features a special plastic cover over the block Terminal. This add-on is designed to reveal the Radeon logo, visible from the side. EK also encloses a single-slot I/O bracket which replaces the original two-slot in order to make installation of multiple graphics cards easier and also transforms the GPU into a gorgeous single slot solution. 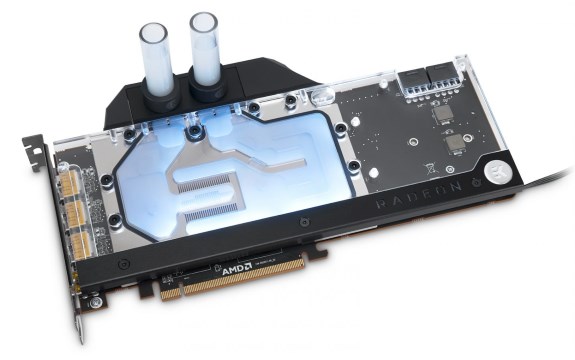