“GeIL is a pioneer in the computer component and peripheral industry, and the company’s team is proud to announce the streamlined functionality of their Super Luce RGB Sync Gaming Memory system. This highly anticipated platform offers gamers the lighting capabilities they demand,” Said Jennifer Huang, VP of Global Sales and Marketing.

GeIL Super Luce RGB Sync Gaming Memory is verified for use with Intel Core i7, i5 and i3 CPUs, as well as combinations of AM4 motherboards and AMD Ryzen processors. Available in 2133MHz to 3200MHz frequencies, GeIL Super Luce RGB Sync Gaming Memory Series offers a sleek design with the lighting effects preferred by gamers. It features a cable-free design that system builders can enjoy and is supported by the popular lighting control apps including ASUS AURA, GIGABYTE Fusion, and MSI Mystic Light. 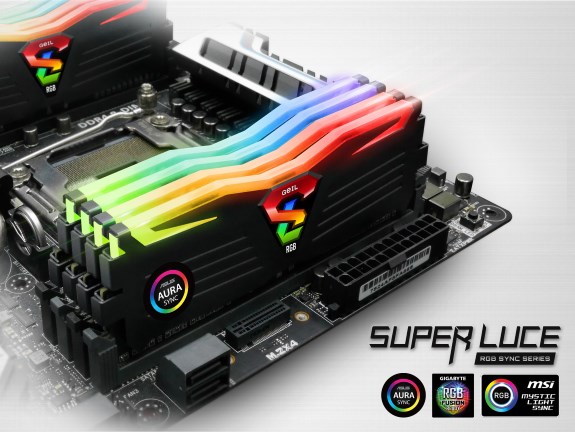