Posted on Friday, Mar 30 2018 @ 16:40 CEST by Thomas De Maesschalck
VideoCardz (or should we say MotherBoardz) got its hands on leaked photos of the ASUS ROG Crosshair VII motherboard. This upcoming X470-based motherboard for AMD's soon-to-be-released Ryzen 2000 series will launch on April 19th.

This model has three PCI Express x16 slots and it looks like there aren't an awful lot of changes versus the Crosshair VI. The site lists the most notable changes below. Some changes were made to the I/O, a PCIe x1 slot got swapped for M.2, and there's a new VRM heatsink:

There’s a new VRM heatsink, but the number of phases has not been modified. The I/O shroud is the same, but I/O shield is preinstalled now. The power on/reset buttons have been moved from the bottom to the right upper side. One of the PCIe x1 slots has been replaced with M.2 slot with a dedicated heatsink. The X370 version has 8 SATA 6G ports, but the X470 has 6. The input/output bracket shows twelve USB ports (2.0/3.0/3.1 etc), the X370 version had 14. In exchange, we get a PS/2 port. The audio chipset is also the same, so don’t expect changes in sound quality. 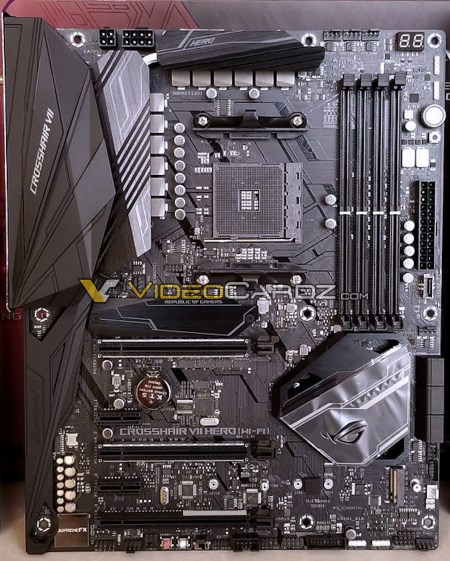