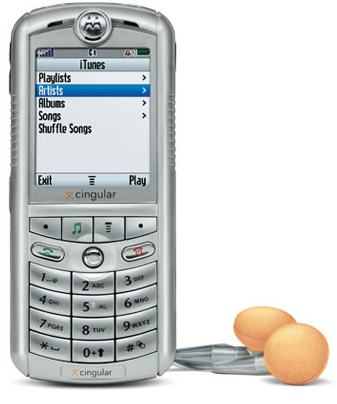 The big announcement we have all been waiting for has just been showcased by Steve Jobs at the Apple event in San Francisco. It's the Motorola ROKR E1 - also known as the first iTunes compatible phone.

Jobs compared the phone with an iPod shuffle on your phone, as it can only store 100 songs. He said both devices can shuffle, both can autofill, but neither has a click wheel. But luckily the Motorola ROKR does have a 176 x 220 262k colour display

Songs can be transferred through a USB cable and when you get a call the phone will automatically stop playing music.

Besides an integrated iTunes client the phone also features a digital camera that can record movies as well as two stereo speakers and a headset. The camera has a 640 x 480 pixels resolution, 4x zoom and flash. The ROKR E1 has a talk time of 9 hours and a standby time of up to 9 days.

Jobs said Cingular will be the exclusive wireless carrier in North America for this phone and the phone will be available in stores by this weekend. On Cingular's website you can already order it for $249.99 with a two-year contract.