Posted on Friday, May 04 2018 @ 12:23 CEST by Thomas De Maesschalck
A leaked webinar from German computer distribution firm Bluechip reveals interesting details about the roadmap of AMD and Intel. VideoCardz captured the most interesting slides and they confirm several prior rumors.

First up, the leaked roadmaps reveal AMD is planning to launch a higher-end Z490 chipset in June 2018 and a mid-range B450 chipset in late July 2018. The Z490 will be really confusing as it uses the same nomenclature as Intel, this is supposedly a beefed up X370 with more PCI Express lanes. I really wish AMD would stop this nonsense, would it be so hard to call this chipset X490?

Next we learn the second-generation AMD Ryzen Threadripper and X399 refresh is slated for August 2018, and that Intel's Z390 is scheduled for Q3 2018. The slides also indicate Intel's eight-core Coffee Lake chips are planned in Q4 2018, and that engineering samples will be provided to OEMs in June. 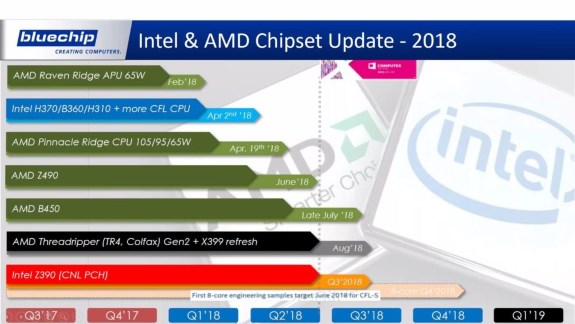