NVIDIA stuns with massive Q1 increase in revenue and profit

NVIDIA blows it out of the park again with another stellar increase in revenue and net income. The chip designer posted record revenue of $3.21 billion, up 66 percent year-over-year, and net income of $1.24 billion, up 145 percent year-over-year. On an adjusted basis, this comes down to $2.05 per share, an increase of 141 percent versus the year-earlier period. This compares very favorably to Wall Street estimates, NVIDIA's revenue was $310 million higher than expected while earnings per share beat by 39 cents.

“We had a strong quarter with growth across every platform,” said Jensen Huang, founder and chief executive officer of NVIDIA. “Our datacenter business achieved another record and gaming remained strong.

“At the heart of our opportunity is the incredible growth of computing demand of AI, just as traditional computing has slowed. The GPU computing approach we have pioneered is ideal for filling this vacuum. And our invention of the Tensor Core GPU has further enhanced our strong position to power the AI era,” he said.

Capital Return
During the first quarter of fiscal 2019, NVIDIA returned $746 million to shareholders through a combination of $655 million in share repurchases and $91 million in quarterly cash dividends.

The chart below tracks NVIDIA's revenue over the past couple of quarters. Gaming revenue is holding up very strong and datacenter revenue is growing at a rapid rate. Not sure how much of this was cryptocurrency, maybe we'll hear more about this during the earnings call. For the current quarter, NVIDIA expects revenue of $3.10 billion, plus or minus 2 percent. 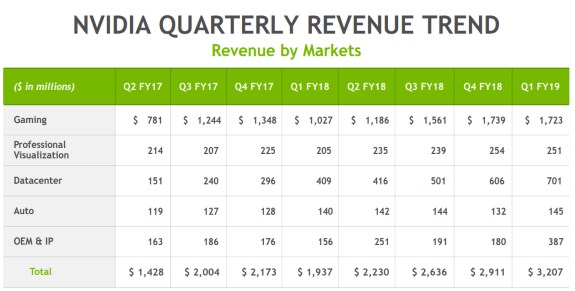