Posted on Tuesday, May 15 2018 @ 16:12 CEST by Thomas De Maesschalck
Logitech introduces the G305, a new wireless gaming mouse with LIGHTSPEED wireless technology and the HERO optical sensor. The firm says this model has 10 times higher power efficiency than its predecessor, this results in Performance Mode battery life of up to 250 hours on just one AA battery. If you switch to Endurance Mode, which downgrades the report rate from 1ms to 8ms, the battery life can hit a whopping nine months on a single battery. Logitech's G305 LIGHTSPEED should be available in stores this month for $59.99. It's offered in black and white editions. 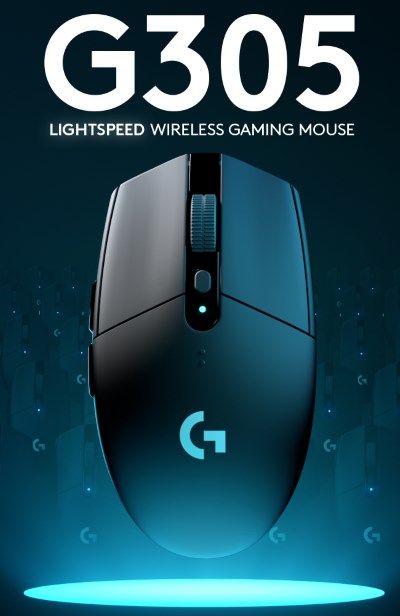 -Logitech G, a brand of Logitech, (SIX: LOGN) (NASDAQ: LOGI) today announced the Logitech® G305 LIGHTSPEED Wireless Gaming Mouse, a next-generation gaming mouse bringing LIGHTSPEED™ wireless technology and the HERO™ (High Efficiency Rated Optical) sensor to all gamers, in a tried and true form factor. The Logitech G305 uses Logitech G’s exclusive LIGHTSPEED wireless technology for a gaming experience that’s faster than most wired mice, as well as Logitech G’s revolutionary HERO sensor, capable of achieving next generation performance at 10 times the power efficiency of the previous generation of mice. With the Logitech G305, there is no reason to game with a leash.

“For years, we have been committed to delivering wireless performance that was faster than our competitor’s wired offerings,” said Ujesh Desai, vice president and general manager of Logitech Gaming. “Through our work, wireless has advanced to the point where esports pros are trusting our innovative technology and winning with our wireless mice. With the G305 we wanted to bring the same top-of-the-line technology to everyone. G305 features our HERO sensor and LIGHTSPEED wireless — all for $59.99. There's never been a better time to go wireless.”

With the Logitech G305, you can play at peak performance with the industry-leading HERO sensor. This sensor is incredibly power efficient, and provides exceptional responsiveness and accuracy, 400 IPS precision and sensitivity up to 12,000 DPI, with no acceleration or smoothing. Plus, with the ultra-fast LIGHTSPEED wireless technology included in the Logitech G305, you get a faster-than-wired gaming experience with a 1ms report rate, end-to-end optimized wireless connection, and incredible responsiveness and reliability for competition-level performance.

Thanks to the extreme power efficiency of HERO, battery life is incredible. You can get 250 hours of continuous gameplay at a 1ms report rate in Performance mode on just one AA battery. Switch to Endurance mode with a 8ms report rate using Logitech Gaming Software (LGS) to extend battery life to up to nine months on a single AA battery.

Even with so much technology inside, the Logitech G305 is not heavy or bulky. It is durable, yet compact and lightweight at only 99 grams for high maneuverability, thanks to its efficient, lightweight mechanical design and ultra-efficient battery usage. Whether you’re playing at your desktop rig or on the go with a laptop, the Logitech G305 is a fit. It is available in Black and White.