Toshiba's portable projector can be used for cell phones 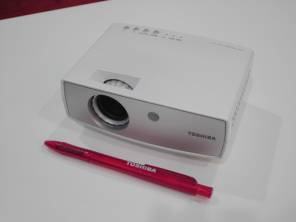 At the IFA 2005 show in Berlin, Toshiba presented a new portable projector that can be used to connect to 3G multimedia cell phones.

This projector weighs only 565 grams and features a 800 x 600 resolution using a 0.55-inch digital mirror device (DMD) chip. It has a 1500:1 contrast ratio and has USB connectivity. The battery weighs 250g and provides enough power for 2 hours of mobile operation, but a full charge will take three hours.

Because the system uses LED technology, it does away with the need for both a lamp and a color wheel. A panel fitted with different colored LEDs serves both as the light source and determines the color of the projected images. LEDs also burns cooler than standard lamps, allowing the projector to be run without needing a fan.

The price of this LED-based projector will be around 999EUR (approx. $1,250) when it is launched by the end of this year.