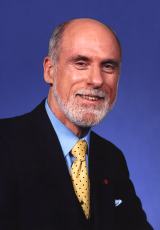 Vinton Cerf, commonly referred to as the founding father of the Internet, has been hired by Google as Chief Internet Evangelist.

"Vint Cerf is clearly one of the great technology leaders of our time," said Google CEO Eric Schmidt of Cerf, who co-designed the TCP/IP protocols that were used to develop the Internet's underlying architecture. "His vision for technology helped create entire industries that have transformed many parts of our lives. We are honored to welcome him to Google."

Over at Google he will help to build network infrastructure, architectures, systems and standards for the next generation of Internet applications.

"Google has already made tremendous strides in making access to information on the web a reality for users across the globe, but we're still in the Internet's early innings," he said. "This medium will enjoy wider-spread use than television, radio or phones, and will ultimately expand beyond planet Earth. Google has always believed in doing things differently, and I believe that places us in a unique position to help bring even the wildest Internet visions into reality."

Cerf joins Google from MCI, where he led technology advancements since 1982, with a break to return to research at the Corporation for National Research Initiatives from 1986 to 1994. On his return to MCI in 1994, he helped to put MCI on the Internet map. With Robert Kahn, he recently received the ACM's A.M. Turing Award, considered "the Nobel Prize for computing," for his achievements in computer networking. Cerf is also working on the Interplanetary Network, a project of NASA's Jet Propulsion Lab, which aims to extend the Internet into outer space for planet-to-planet communications. He will also continue in his role as the Chairman of the Internet Corporation for Assigned Names and Numbers (ICANN).

Cerf says he will join Google on October 3. He explains Chief Internet Evangelist was actually the second title he proposed. He'd love to be referred to as Archduke but that title was just a little bit over the top..