Posted on Friday, Jul 13 2018 @ 12:19 CEST by Thomas De Maesschalck
Gartner published its quarterly PC sales report and notes Q2 2018 was remarkable as shipments grew for the first time since Q1 2012. Sales of computers have been in a downward spiral for quite some time now, so it's interesting to see they grew 1.4 percent to 62.1 million units in Q2 2018. The growth was driven by an uptick in business demand, which was offset by lower sales to consumers. 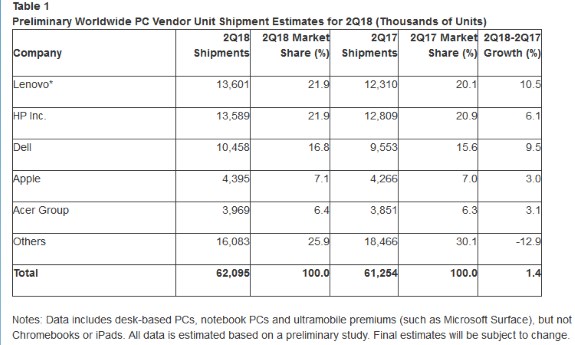 All regions experienced some growth compared with a year ago. While the results are a positive result for the PC industry, Gartner analysts said this sign of market stability is not enough to declare a PC industry recovery just yet.

"PC shipment growth in the second quarter of 2018 was driven by demand in the business market, which was offset by declining shipments in the consumer segment," said Mikako Kitagawa, principal analyst at Gartner. "In the consumer space, the fundamental market structure, due to changes on PC user behavior, still remains, and continues to impact market growth. Consumers are using their smartphones for even more daily tasks, such as checking social media, calendaring, banking and shopping, which is reducing the need for a consumer PC.

"In the business segment, PC momentum will weaken in two years when the replacement peak for Windows 10 passes. PC vendors should look for ways to maintain growth in the business market as the Windows 10 upgrade cycle tails off."

With the completion of Lenovo's joint venture with Fujitsu, three out of four PCs were shipped by the top five PC vendors in the second quarter of 2018. With the inclusion of Fujitsu’s PC shipments due to the joint venture (a formation of Joint Venture with Fujitsu), Lenovo was in a virtual tie with HP Inc. for the top spot in the second quarter of 2018 based on global PC shipments (see Table 1). All of the top five PC vendors experienced an increase in worldwide PC shipments in the quarter.

HP Inc. had its third consecutive quarter of year-over-year PC shipment growth. HP Inc. maintained steady growth across all regions, except the U.S. In the other regions, its shipment growth well exceeded the regional averages. Lenovo experienced its highest growth rate since the first quarter of 2015.

While Dell's competitors have shown PC shipment declines periodically in the past two years, Dell's shipments did not decline during this time because of its strong focus on growth areas, especially in the commercial segment, as well as cutting off unprofitable businesses.

In the U.S. PC market, the industry returned to growth after six consecutive quarters of shipment declines. In the second quarter of 2018, U.S. PC shipments totaled 14.5 million units, a 1.7 percent increase from the same period last year (see Table 2). HP Inc. continued to be the market leader in the U.S., but Dell closed the gap, as Dell's U.S. PC shipments increased 7.2 percent.

PC shipments in EMEA reached 17.4 million units in the second quarter of 2018, a 1.3 percent increase year over year. In Western Europe, demand was strong for business PCs in Germany and the U.K. Eurasia, which includes Russia, remained the growth region in EMEA. While the second quarter is usually a slower quarter in terms of PC demand, several countries, such as Russia, Ukraine and Kazakhstan, continued to see increasing consumer demand.

PC shipments in Asia/Pacific totaled 21.3 million units, a 0.1 percent increase from the second quarter of 2017. India, Indonesia, Thailand and other emerging markets in Asia showed improvement in the commercial segment due to demand for replacing aging PCs and upgrading to Windows 10. In China, PC shipments declined 3.6 percent year over year as some business procurements have been postponed to 2019, and the consumer market is saturated.

These results are preliminary. Final statistics will be available soon to clients of Gartner's PC Quarterly Statistics Worldwide by Region program. This program offers a comprehensive and timely picture of the worldwide PC market, allowing product planning, distribution, marketing and sales organizations to keep abreast of key issues and their future implications around the globe.