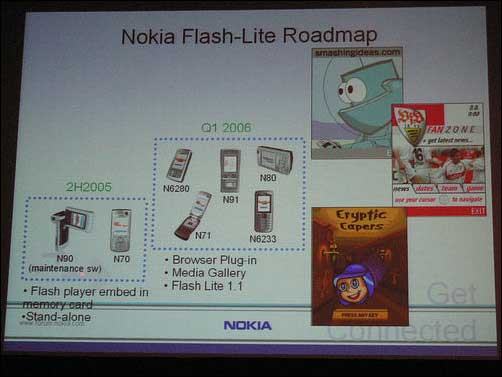 Here's a look at Nokia's N-Series roadmap. This slide comes from a Macromedia Studio 8 press event in Taipei that took place on August 30th.

The roadmap indicates Nokia will launch a new N80 slider and an N71 clamshell model in the first half of 2006.

One of the surprises is the possible delay of Nokia's N91. Normally this phone should arrived by the end of this year but it looks it may have been postponed to the first quarter of 2006. However, this is not certain since the slide is titled Flash Lite roadmap. It may just mean that Flash Lite will only be available for that device then, and that the phone will retail earlier. This is given credence because the N70 uses Symbian OS 8.1a while the N91 uses Symbian OS 9.1.

Another strange thing about this roadmap is the N6280 and N6233. I think this is an error. A phone called Nokia 6280 is already announced and it looks to be the same as the one on the picture. Then there's also the N6233, I think this should be the Nokia 6233 as all other N-series models only use two digits.