Posted on Wednesday, Aug 08 2018 @ 16:53 CEST by Thomas De Maesschalck
Intel has created its first "Crimson Canyon" NUCs that feature a discrete graphics card from AMD. The new NUC813CYSM and NUC8i3CYSN feature the Intel Core i3-8121U processor and a Radeon 540 video card from AMD. The former model has 4GB RAM and a 1TB HDD, it will ship in mid-September and current pre-order pricing is $575. The latter system has 4GB RAM and a 1TB HDD, it's expected in October and is listed for $530.

Those are basically laptop-class components: the processor is a 15 watt, dual-core chip with support for hyperthreading and a base clock speed of 2.2 GHz and boost speeds up to 3.2 GHz. The most interesting thing about the processor is that it’s one of Intel’s first 10nm chips, but you’d probably still get better performance from an Intel Core i5-8250U quad-core chip, even though it’s a 14nm processor. 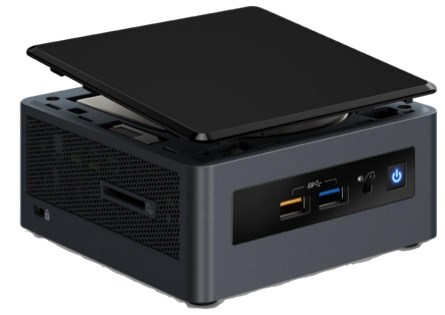