Existing X399 motherboards should support the new Threadrippers after a simple BIOS update. Lots of reviews on the web right now, the conclusion is that the 2990WX is the fastest desktop processor in the world. AMD definitely takes the crown from Intel in the HEDT market. It's perfect for use cases that take advantage of extra cores, making it an ideal chip for 3D rendering and media encoding jobs. As usual, gamers better stick with the non-HEDT platforms from Intel and AMD. 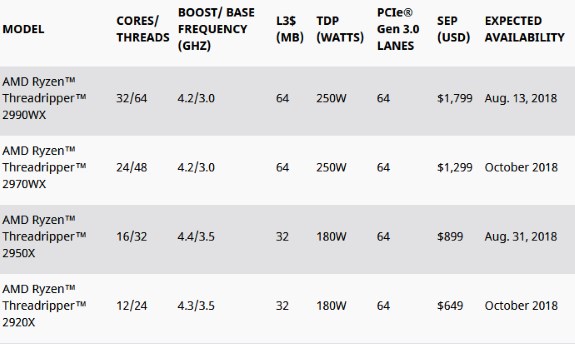 “We created Ryzen Threadripper processors because we saw an opportunity to deliver unheard-of levels of multithreaded computing for the demanding needs of creators, gamers, and PC enthusiasts in the HEDT market,” said Jim Anderson, senior vice president and general manager, Computing and Graphics Business Group, AMD. “With the 2nd Gen processor family we took that challenge to a whole new level – delivering the biggest, most powerful desktop processor the world has ever seen.”