INNO3D, a leading manufacturer of awesome high-end graphics hardware components and various innovations enriching your life, introduces a new family of INNO3D graphics cards based on the NVIDIA GeForce® RTX 2080 Ti, RTX 2080 and RTX 2070 GPUs. The new generation of gaming cards will exist of a range of TWIN X2 products, a series of JET editions and the Brutal iCHILL BLACK editions.

The new NVIDIA GeForce RTX GPUs have reinvented graphics and set a new bar for performance. Powered by the new NVIDIA Turing™ GPU architecture and the revolutionary NVIDIA RTX platform, the new graphics cards bring together real-time ray tracing, artificial intelligence, and programmable shading. This is not only a whole new way to experience games—this is the ultimate PC gaming experience.

The new GPUs were unveiled at a special NVIDIA two-day event called the “GeForce Gaming Celebration” which kicked off tonight at the Palladium in Cologne, Germany ahead of Gamescom 2018.

The groundbreaking INNO3D GeForce® RTX 2080 Ti, RTX 2080 and RTX 2070 graphics cards are designed to perform at an unprecedented level. They are packed with many new features never before seen on a consumer gaming GPU, including support for real time ray tracing and ultra-fast GDDR6 memory, and can handle games running in 4K and VR with ease.

The INNO3D GeForce® RTX 2080 Ti iCHILL BLACK Edition is an Apocalyptic Dominator that survives under extreme surroundings by combining the forces of nature and utilizes air and water into one solution. Air flows through the two 120mm fans while water runs through its veins and the super-conductive 240mm radiator. This Hybrid keeps the brutal performance under control; not only is it sniper-silent, it also lets you monitor the 'elementals' such as Fan Speed, GPU status and Temperature on screen.

“This is an epic chapter in the history of INNO3D graphics cards” said Stanley Wong, head of global sales at INNO3D. “We have deployed all innovation and cooling technology known to date into our new series of Brutes. And once you experienced our graphics solutions, you won’t know what to do without them. They are simply that awesome!” 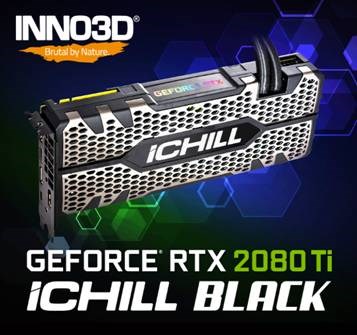