Intel Whiskey Lake has hardware-based mitigation against Meltdown and L1TF

Earlier this week, Intel introduced its Whiskey Lake processors. What was not publicly disclosed at the moment of launch is that these chips feature in-silicon mitigation against Meltdown and L1TF (Foreshadow).

In a statement to Tom's Hardware, Intel explains the in-silicon fixes will expand over time. Whiskey Lake is the first consumer chip to have hardware mitigation against some of the CPU vulnerabilities, and the upcoming Cascade Lake server architecture will expand on this with protection against Spectre Variant 2. Other Spectre variants will still require software-based mitigation.

The Cascade Lake data center processors marked the introduction of in-silicon patches, but those chips have a different set of protections than the consumer processors. For instance, Cascade Lake has in-silicon protection against Spectre V2, whereas the Whiskey Lake processors do not. Intel representatives indicate that over time those Spectre V2 protections will also come to consumer chips. The limited scope of the in-silicon patches reminds us that Intel, like the many other companies impacted by these vulnerabilities, is still in the early stages of addressing the issues. 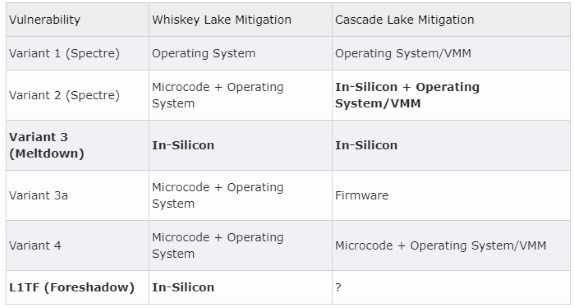 Do note that the Amber Lake chips do not have the mitigations.