Posted on Friday, Sep 21 2018 @ 08:50 CEST by Thomas De Maesschalck
Alphacool has a fancy new Eiswolf GPX Plexi Light cooler for NVIDIA's GeForce RTX 2080 and GeForce RTX 2080 Ti video cards. This full-cover block has a large plexiglass surface, allowing all water-bearing components and the PCB to be viewed. Furthermore, it has RGB LED light effects. It's basically a fancier version of the Eisblock GPX Plexi, with the aluminium case removed so you can see more of your card. These blocks are sold via the Aqua Tuning webshop for 119.79EUR.

Compared to the Eisblock GPX Plexi cooler, Alphacool has removed the aluminium case which so now you see all the beautiful plexi in all its glory. The actual cooler remains identical to the big brother and is also made of nickel-plated copper. The cooler has 35 fins which are only 0.6 mm thick.

The cooler is a full cover block and extends over all components of the graphics card that need cooling.

The optical highlight of the Eisblock GPX Plexi Light cooler is the complete and integrated RGB lighting. This is located on the side of the PCIe port and runs along the edge of the cooler for almost 20 cm to ensure that it perfectly illuminates the entire surface of the cooler. The RGB LED lighting is compatible with ASUS Aurora Sync, Biostar VIVID LED DJ, Gigabyte RGB Fusion, MSI Mystic and many more. You may need a Male-to-Female adapter for some motherboards. 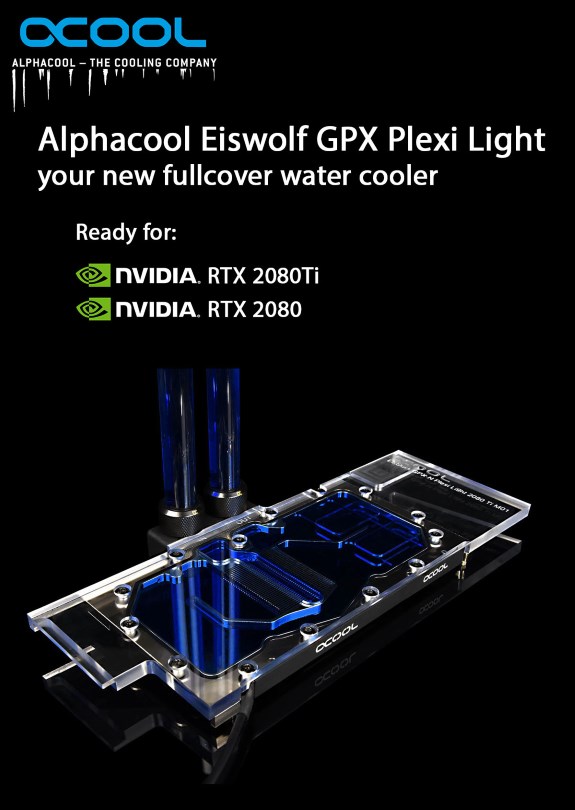