Posted on Monday, Nov 05 2018 @ 13:50 CET by Thomas De Maesschalck
DRAMeXchange reports prices of DDR4 memory chips are dropping hard. Contract prices began to fall in October and the pricing of 4GB DDR4 modules is currently down 10.14 percent quarter-over-quarter. Similary, the contract pricing of 8GB modules dropped 10.29 percent in the same timeframe. The DRAM market is now in oversupply and further price drops are expected in the coming months, as well as in 2019.

“As the indicator of the price trend in the contract market, spot prices have kept falling since the early 2018 and continued their downtrend from September”, says Avril Wu, senior research director of DRAMeXchange. The latest update reports that the average spot price of 1G*8 chips has dropped to US$6.946, showing a difference of 5% with the average contract price of US$7.31. While the oversupply situation and the falling spot prices pull contract prices of PC DRAM modules downward, the market penetration of 8GB modules is starting to increase very rapidly because suppliers have aggressively expanded shipments of the higher-density products. DRAMeXchange furthermore believes that 8GB modules will surpass 4GB counterparts in shipment volume much sooner than originally anticipated and become the market mainstream. It should also be noted that DRAMeXchange will be using prices of 8GB modules as the base for determining the contract price trend in the PC DRAM market starting in 2019.

Seasonal headwinds expected to aggravate price decline in the PC DRAM market during 1Q19
PC-OEMs have not been able to step up their product shipments in 2H18 due to the shortage of Intel CPUs. Going forward, the pressure of rising component costs will only mount as the shipment season transitions from the peak period to the slow period. Since DRAM prices had risen for nine consecutive quarters, they are expected to take a plunge as they move past the inflection point. The sliding ASP in the PC DRAM market will also add to the downward pressure on prices of PC DRAM modules, leading to large and sudden drops.

Looking ahead to 1Q19, seasonal headwinds will affect shipments of end products not only in the PC market but also in the server and smartphone markets. Furthermore, the quarter will be the period for the channel market and OEMs to eliminate excess inventory. Thus, negotiating contracts will be very challenging for the DRAM suppliers. The ASP in the whole DRAM market is forecast to fall by as much as around 20% YoY in 2019, according to DRAMeXchange’s latest analysis. After reaching peak profit in 3Q18, DRAM suppliers are now optimizing their costs so that they will have a soft landing in 2019 as prices are marked down every quarter. 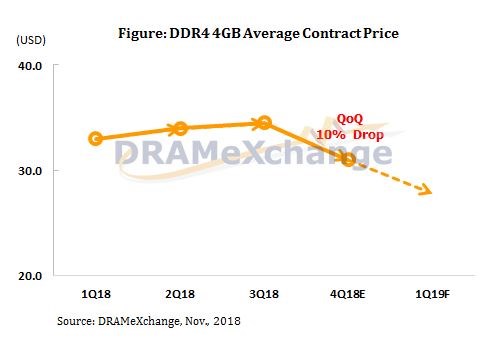