In a new article, Steve from GamersNexus dives deep into the reason why power consumption and thermals of Intel's latest processors are much higher in some reviews than in others. Basically, it comes down to which motherboards (and which settings) are used because a lot of boards natively operate outside the guidance of Intel.

The Core i9-9900K for example has a 95W TDP but the chip can draw up to 150W or more in some workloads. Most of Intel's turbo policies are "guidance", the chip giant isn't strict about this and the result is that motherboard makers are blowing past the specified turbo duration limits with their Z390 boards. This results in higher performance, but also in higher power consumption and hotter chips.

At some point, you’re left asking who’s really at fault. Maybe Intel isn’t being strict enough, as most of the turbo policies are “guidance,” not enforced specification or requirements. Maybe the motherboard manufacturers are stepping out of bounds. We have heard rumor that Intel will crack-down harder on board manufacturers for violating these specs this generation, and we hope that’s true. It’s an interesting dichotomy between companies like Intel and NVIDIA: For NVIDIA, too much power is exhibited, to a point where we get calls weekly from NVIDIA’s partners complaining about some new overstepping of boundaries. For Intel, the boundaries are too weakly defined, resulting in manufacturers walking all over Intel. This makes Intel look both good and bad, so it is up to Intel to determine how strictly it wants to enforce its turbo policies and TDP: the “good” is higher performance in benchmarks, whereas the “bad” is exiting the suggested “TDP” (for what that metric is worth) and overdrawing on power while overheating in temperature.

You can read the full piece over here. 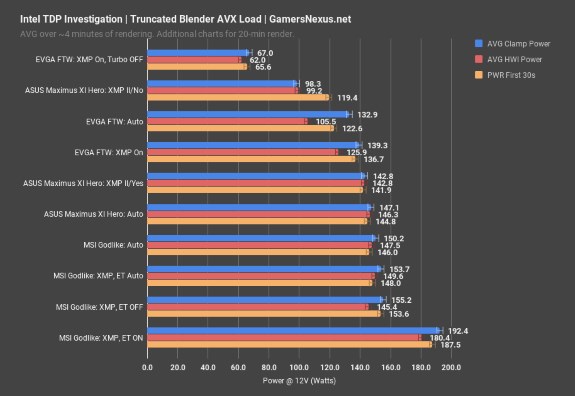