HTTP/3 to do it without TCP

Posted on Tuesday, Nov 13 2018 @ 10:16 CET by Thomas De Maesschalck
The Internet Engineering Task Force (IETF) renamed the HTTP-over-QUIC experimental protocol to HTTP/3, making it the second Google-made technology to become an official HTTP protocol upgrade after the adoption of Google's SPDY as the underlying base of HTTP/2.

The new protocol aims to get rid of TCP to make the Internet even faster. This is done by adopting Google's Quick UDP Internet Connections (QUIC), a technique that builds upon UDP instead of TCP. Besides lower latency, QUIC is also more secure as it offers encryption by default.

QUIC stands for "Quick UDP Internet Connections" and is, itself, Google's attempt at rewriting the TCP protocol as an improved technology that combines HTTP/2, TCP, UDP, and TLS (for encryption), among many other things.

Google wants QUIC to slowly replace both TCP and UDP as the new protocol of choice for moving binary data across the Internet, and for good reasons, as test have proven that QUIC is both faster and more secure because of its encrypted-by-default implementation (current HTTP-over-QUIC protocol draft uses the newly released TLS 1.3 protocol).

The image below from Google illustrates the difference between TCP, TCP + TLS, and QUIC: 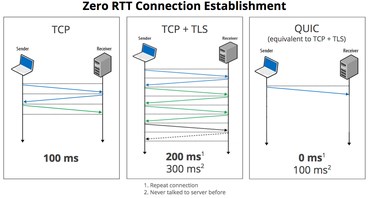 Google and Facebook servers already support HTTP-over-QUIC, and the technology has been added to Chrome since version 29 and in Opera 16. More details at ZD Net.