WD Black SN750 NVMe SSDs ship with and without heatsink

Posted on Monday, Jan 21 2019 @ 13:09 CET by Thomas De Maesschalck
Western Digital introduces the WD Black SN750, a new line of NVMe SSDs. These models are offered with and without heatsink, in 250GB (without heatsink only), 500GB, 1TB, and 2TB capacities. The SN750 uses largely the same hardware as its predecessor but has new firmware that promises to deliver a slight performance improvement.

Performance depends on the capacity. The 1TB edition is the fastest, it offers up to 3470MB/s read speeds, 3000MB/s write speeds, 515K random read IOPS, and 560K random write IOPS. Pricing ranges from $79.99 for the 250GB version to $499.99 for the 2TB edition, the models with heatsink will be a bit more expensive but we don't know the exact pricing.

Western Digital Corp. (NASDAQ: WDC) today introduced its second-generation, high-performance WD Black® SN750 NVMe™ SSD with up to 2TB capacity on a single-sided M.2 form factor, and will be showcasing a version for desktop systems or custom-built gaming rigs, which has an integrated heatsink that helps maintain speed and temperature. This enhanced drive enables gamers and hardware enthusiasts to snag a tangible, next-level competitive boost during intense PC gameplay.

Advancements in PC and graphics technologies are taking PC gaming to new heights. To take advantage of the increasingly immersive and responsive in-game experiences, gamers must navigate several challenges, including higher performance demands and large file sizes, with some games approaching file sizes exceeding 100GB. Top-level transfer speeds give users near-instant access to their games and files, getting them back into game action more quickly and boosting the system’s overall responsiveness.

To support very fast read and write data speeds, traditional NVMe SSDs are designed to throttle performance in order to keep the drive’s operating temperature within acceptable parameters. In collaboration with EKWB, a leader in PC cooling technology, the WD Black SN750 NVMe SSD will offer an option for a sleek EKWB-designed heatsink for capacities ranging from 500GB to 2TB, with estimated availability in Spring 2019. The heatsink dissipates heat from the drive during intense operation, allowing the SSD to run for longer periods of sustained read and write performance, compared with non-heatsink versions.

Level Up with the WD Black SN750 NVMe SSD
The second-generation NVMe SSD to be built on Western Digital’s own 3D NAND technology, firmware and controller, the WD Black SN750 NVMe SSD features a vertically integrated SSD platform designed to maximize NVMe SSD performance for gaming and hardware enthusiasts looking to build or upgrade their gaming PC or a custom PC. Delivering exceptional sequential read (up to 3,470MB/s1 for 500GB and 1TB model) and write performance (up to 3,000MB/s1 for 1TB model), combined with large capacity, the new drive reduces the time required for users to access their programs and files, load games and transfer large games, 4K/8K videos and other data-intensive content. Additionally, the SSD features up to 515,000 random-read and 560,000 random-write IOPs (for 1TB model) for extreme throughput, allowing the SSD to manage multi-threaded applications and data-intensive environments. This enables higher responsiveness when accessing multiple files in various locations to load new levels or games, with less time required to save in-game progress during gameplay. 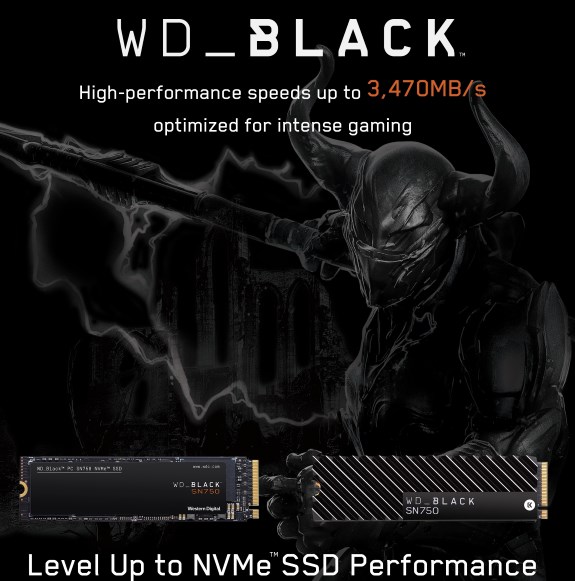