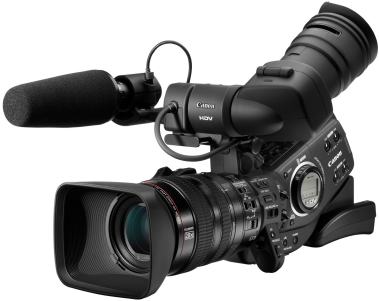 The XL H1 camcorder has three 1/3 inch 16:9 interlaced CCDs that capture images at 1080i resolution. The camcorder features selectable frame rates of 60i, 30 Frame and 24 Frame to allow the user to adjust to the assignment at hand and can switch back to SD resolution if needed.

At the 30 Frame rate, broadcasters can capture high motion, like sports with confidence that each frame is captured individually and completely. Filmmakers can utilize the 24 Frame rate when creating the look and feel of movie film. The 60i frame rate, meanwhile, delivers exceptional resolution for shooting environments like ENG or Reality TV.

The XL H1 HD camcorder is the first model to include Canon's proprietary DIGIC DV II image processor. DIGIC DV II is an image processor that can process both HD and SD video signals as well as still photos, while maintaining the correct color space for each mode.

To streamline in-studio television production, the XL H1 model offers HD-SDI and SD-SDI output. HD-SDI output allows professionals to directly connect to a TV control room or a non-linear editing system. With this feature, users can plug their XL H1 camcorder into any professional's system with an HD-SDI input and can deliver live, unfiltered HD content in all its brilliant detail. With other HDV models on the market, the user must feed the HD signal into an analog to digital signal converter box which adds an extra step, not to mention, an extra cost. The XL H1 camcorder can also record to HDV Master recording media or Mini-DV tapes.

Multi-camera shoots with the XL H1 model are no problem thanks to the camcorder's Genlock synchronization input feature. This feature allows many XL H1 camcorders to synchronize through a switcher. With its SMPTE time code input and output, multiple cameras on a shoot can all lay down the same time code. The XL H1 camcorder uses a customizable open-architecture approach, selectable frame rates and multiple output options so professionals have exactly the right tool, every time they need it.

Each year, the number of filmmakers turning to video-based acquisition solutions for movie production grows. Moviemakers that shoot video place strong emphasis on delivering the "film" look to their pictures. Canon's new XL H1 camcorder offers filmmakers the ability to customize their video recordings using a number of variables, including: three color matrixes for a wide range of color correction and two cine gammas for intricate adjustment of dynamic range, customizable: knee, black stretch, horizontal detail, coring, sharpness, noise reduction, color gain, hue and master color adjustments. Each one of these settings can be modified independently, thereby giving the camera operator precise control over the "film-like" appearance of their video.

In addition to its extraordinary video capabilities, Canon's XL H1 HD camcorder can capture still images plus metadata at full HD resolution (1920 x 1080 dpi or 2.1 megapixels) onto a standard Secure Digital (SD) Memory Card and MMC media. The "Photo" button located on the outside of the camcorder allows users to capture still images at up to five frames per second. Camcorder settings can be stored on the memory card and transferred to another camcorder so setup can be replicated.

The XL H1 camcorder's still image capture plus metadata feature provides an in-camcorder solution for cinematographers and directors to check for scene continuity and provides added back-up to any still photographers on set.

As a menu option, users can chose to view Aspect Ratio Guides in the viewfinder. Canon provides a choice of 4x3, 13x9, 14x9, 1.66:1, 1.75:1 1.85:1, 235:1 guides. The XL H1 HD camcorder viewfinder also includes a feature called Focus Help. The first setting - Peaking - creates an exaggerated line in the viewfinder that disappears when the image is focused. The second setting - Magnifying - enlarges the viewfinder image, helping the camera operator better see if the image is properly focused.

The new XL H1 HD camcorder features Canon's XL-interchangeable lens mount. For the XL H1 camcorder, Canon drew upon its exceptional heritage and expertise in designing and manufacturing lenses for photography and broadcast TV to create its new 20x HD video zoom lens with Superior Canon Optics. This lightweight, high performance lens achieves fast, precise focusing and a unique balance of focal length, angle of view and depth of field; key quality attributes that distinguish Canon from some other brands.

In addition it incorporates multiple Fluorite elements for superior contrast, resolution and color fidelity through the reduction of chromatic aberration. The 20x HD Video lens offers a fast f/1.6 to f/3.5 aperture for users that shoot under the most demanding lighting conditions and a close focusing distance from only 20mm away (when at wide angle). At an aspect ratio of 16:9, the 20x zoom range is an impressive 38.9mm to 778mm (35mm equivalent). At the 4:3 aspect ratio, it is an equally impressive 47.4mm to 954mm (35mm equivalent). The lens features a 72mm filter thread, two independent ND filters (1/6, 1/32), focus and zoom presets, and optical image stabilization.

Canon's Super-Range Optical Image Stabilization (OIS) system corrects camera shake instantly so even hand held shots, at full telephoto, and shots taken from a moving car, are smooth and steady. Because it is optical, it can compensate for a greater degree of camera shake and avoids any loss in image quality, unlike some electronic image stabilizers.

Other optical image stabilizers use a gyro sensor to detect camcorder vibration (the data from which controls a vari-angle prism that continuously corrects the path of the incoming light). Canon's SuperRange OIS system goes one step further by examining the image after the CCD receives it and detecting any low-frequency vibrations missed by the gyro. This data is fed back to accelerate and refine the movement of the vari-angle prism. This greatly improves performance for low frequency vibration, resulting in the most advanced optical image stabilization available today.

The XL H1 camcorder and the 20x HD Video Lens with Superior Canon Optics will be available as a kit in November for an estimated selling price of $8,999.