Tesla reveals its own self driving car chip

As was already reported in 2017, Tesla dumped NVIDIA in favor of its own self-driving car technology. Now the car maker shared more details about its in-house solution, which it promises is the "best in the world'. Apparantly, Tesla's own chip is already in production as the company used it for Model S and Model X cars since sometime last month.

Each Tesla Full Self-driving (FSD) chip is an ARM-based SoC that packs 6 billion transistors in a 260mm² die area. It's made by Samsung on a 14nm process in Austin, Texas, runs at 2.0GHz and the two chips on the FSD board in the new Tesla cars offer a combined computing power of 144 TOPS. More at Electrek.

Bannon also said that hardware cost about 20% less per car than the Autopilot hardware 2.5. He said that the difference is paying for the development of the new hardware. 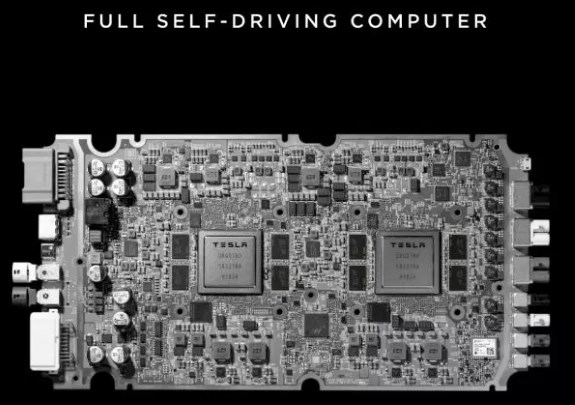 At the event, Musk said NVIDIA is a great company but that its hardware was too generalized for Tesla. The firm continues to rely on computer vision and Musk said the lidar technology used by other car makers is a fool's errand. He compared this technology to an "expensive appendix".

Tesla claims its FSD chip offers 21x higher frame per second processing than the previous solution, which was powered by NVIDIA hardware. Furthermore, Tesla claims its second-generation FSD chip will offer 3x higher performance, but that chip is still two years away.

"Tesla was inaccurate in comparing its Full Self Driving computer at 144 TOPS of processing with Nvidia Drive Xavier at 21 TOPS," a spokesman said in an email. "The correct comparison would have been against Nvidia's full self-driving computer, Nvidia Drive AGX Pegasus, which delivers 320 TOPS for AI perception, localization and path planning." The statement also contends that "while Xavier delivers 30 TOPS of processing, Tesla erroneously stated that it delivers 21 TOPS. Moreover, a system with a single Xavier processor is designed for assisted driving AutoPilot features, not full self-driving."

On a related note, Tesla claims there will be "one million" self-driving robot taxis as soon as 2020. The firm plans to release an app that will allow Tesla car owners to turn their car into an automated taxi. In exchange for providing this car sharing platform, Tesla will receive about 25 to 30 percent of the revenue.