It looks like earlier reporting about the AMD Ryzen 7 2700X 50th Anniversary Edition being nothing more than a fancy box and a processor with a laser engraved autograph of CEO Lisa Su was wrong.

The Ryzen 7 2700X 50th Anniversary Edition includes not just the processor and a Wraith Prism RGB cooling solution, but also two AAA games: Tom Clancy's "The Division 2" Gold Edition, and "World War Z," a black cotton T-shirt with AMD 50 artwork on both sides, and a special case-badge with another signature of the CEO, besides the Ryzen 7 case-badge. The 2 Free Games offer is being extended to the entire Ryzen 2000 AM4 desktop processor family, and several Radeon GPU models, including Radeon VII, RX 500 series, and RX Vega series.

The Ryzen 7 2700X 50th Anniversary Edition will reportedly cost about $50 more than the regular version. 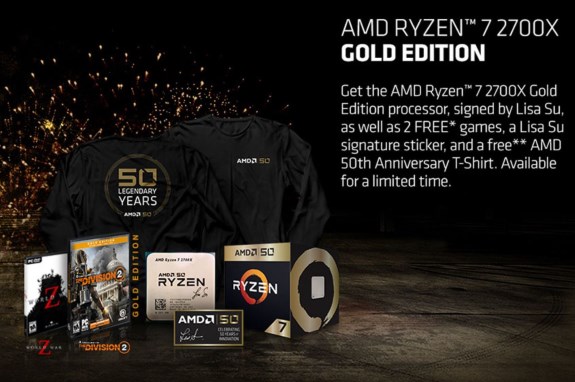