Posted on Monday, May 06 2019 @ 18:53 CEST by Thomas De Maesschalck
Japanese HDD motor maker Nidec expects sales of PC HDDs will fall almost 50 percent this year. The company, which makes 85 percent of all HDD spindle motors, predicts sales of PC HDDs will come in at just 65 million units this year, down from 124 million in 2018. Sales of other types of HDDs are also expected to fall, but at a much lower rate.

The new guidance is a downward revision, it seems the transition to SSDs is going faster than Nidec anticipated, and there's also a headwind caused by weak market demand.

According to Nidec's data, unit sales of hard drives declined by around 43% from 2010 to 2018, going from around 650 million units in 2010 to 375 million units in 2018. And it looks like sales will continue to drop in the coming years. Recently Nidec revised its HDD shipment forecast downwards from 356 million drives to 309 million drives in 2019, which will further drop to 290 million units in 2020. The recent drops in HDD shipments have already forced Nidec to optimize its HDD motor production capacities and repurpose some capacity to other types of products. 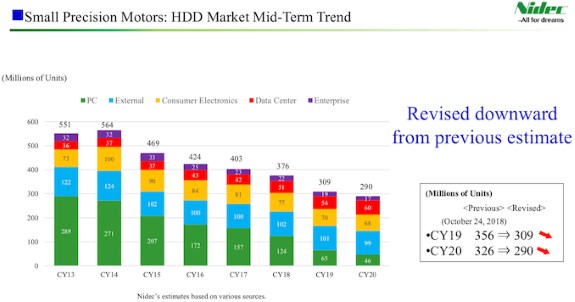