Jeff Bezos shares his vision to return to the Moon

Posted on Friday, May 10 2019 @ 14:17 CEST by Thomas De Maesschalck
About three years ago Elon Musk shared his vision to take humanity to Mars and now Amazon founder Jeff Bezos laid out his plan to take humans back to the Moon. While not as well known as SpaceX, Bezos has his own spaceflight startup called Blue Origin. The company has been developing rockets since 2000 and just like SpaceX it aims to significantly reduce the cost of spaceflight.

Yesterday, Bezos showed off his "Blue Moon" plans, a moon lander that could carry up to 6.5 tons to the lunar surface.

In a configuration with "stretch tanks," Bezos said Blue Moon could carry up to 6.5 tons to the lunar surface, and this would be large enough for a crewed ascent vehicle. This aligns with NASA's vision for a multi-stage lunar lander that involves both a descent vehicle and then a different spacecraft for humans—the ascent vehicle—that will launch back from the surface of the Moon and return the crew to low lunar orbit. Blue Origin will bid on the descent vehicle portion of NASA's lunar lander contract.

Bezos also talked about expansion into the Solar System. His preferred solution is not to settle on other planets or moons, but to colonize space via artificial worlds known as O'Neill cylinders, which could potentially house up to one million people per cylinder.

Each environment would be climate controlled, with cities, farms, mountains, or beaches. "This is Maui on its best day all year long," Bezos said. "No rain. No earthquakes. People are going to want to live here." And when they need to, they could easily fly back to Earth. 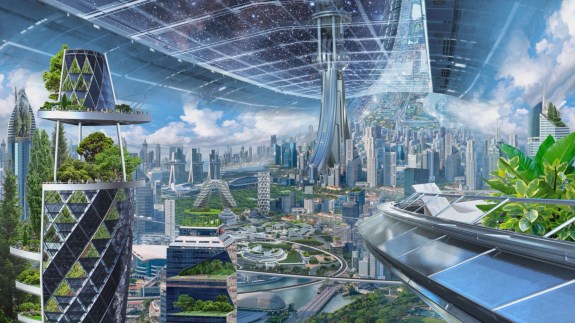 However, Bezos acknowledged this is something for a far-flung future, and that this generation's challenge is to build the "road" to space. Bezos identified two key problems that are holding back space exploration. First up there's the huge cost of space travel. Secondly, the other limiting factor is that human activity in space must be able to rely on resources in space, such as water from the Moon, metals from asteroids, and energy from the Sun. Full details at ARS Technica.