Raja Koduri: AMD has no software ecosystem without Intel

During Intel's 2019 Investor Meeting, graphics chief Raja Koduri made some surprising remarks about his previous employer. The former head of AMD's Radeon Technologies Group blasted AMD for now having any memory or interconnect strategy, and the tiny size of the company's developer ecosystem. PCGamesN covers it it in detail and points out that these statements contradict what Koduri told the world when he still worked for AMD.

He was not always Intel’s Raja Koduri, but once a big noise at AMD, and as such you’d think he would have some very specific insights into the inner workings of the red team. “[AMD] has two architectures,” he says, “no memory or interconnect strategy that I know of, and the size of the developer ecosystem is tiny. In fact, without our invaluable software contributions they have no software ecosystem that’s meaningful.”

Ouch. That’s a stinging indictment of AMD’s software strategy right there, but also it seems a little at odds with what he’s said in the past. Granted, that was when he was still employed by the red team, but still it’s hard to believe he’s forgotten all about the Infinity Fabric interconnect, and the AI-centric Radeon Instinct line of GPUs that he helped start.

In the image below, Intel compares itself with NVIDIA (left) and AMD (right): 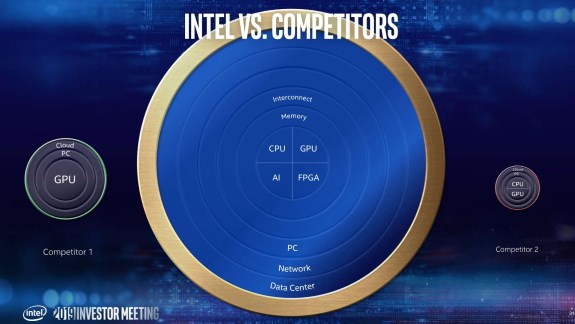