Gaming display shipments are up 112 percent

Posted on Thursday, May 23 2019 @ 11:37 CEST by Thomas De Maesschalck
TrendForce analysts calculated that sales of gaming displays hit 5.4 million units in 2018, a rise of 112 percent versus 2017. This fast-growing market has better margins that regular displays and both aspects have lured a lot of new players to the display market. This year, sales are expected to hit a total of 7.9 million, representing a growth of 46 percent.

ASUS is the biggest supplier of gaming monitors, and MSI was the fastest grower:

According to the latest research by WitsView , a division of TrendForce , gaming monitor (which WitsView defines as displays with a frame rate of 100Hz or above) shipments reached 5.4 million units in 2018, a 112% growth from 2017. Due to the continually expanding presence of LCD monitor brands in the gaming market and the joining of latecomer brands, gaming monitor shipments are expected to grow by leaps and bounds in 2019, looking upwards of 7.9 million units, a YoY growth of 46 %.

TrendForce Senior Research Manager Anita Wang explains that gaming monitors started to shine in the LCD market from 2017 onwards. Thus as the gaming market continues to expand in scale, now everyone wants a slice of the market, be it upstream panel manufacturers or downstream monitor brands, or even the multitude of brands who have never sold LCDs before, causing this market to bustle like never before.

MSI Grabs First Place in Gaming Monitor Market Growth, 2018
First place went to ASUS, the alpha in the industry, while second place went to Acer, who has gone all in and is following closely behind. Samsung took home third place thanks to its high cost-performance ratio curved gaming monitors, which formed 98 % of all its products. Fourth place was AOC/Philips, the company which took a greater interest in and capitalized on curved gaming products in the fourth quarter.

ASUS, Acer and AOC/Philips Fight for Shipment Dominance in 2019
2019 will see the three warring brand giants, ASUS, Acer and AOC/Philips, fighting for the throne, all of which have a chance to break the million unit threshold in gaming monitor shipments. Among the three, ASUS will seek to maintain its lead by extending its gaming monitor production lines; Acer is actively expanding in the High resolution and HDR sector and enforcing its hold on related peripheral products; and AOC/Philips will be rolling out gaming monitor models this year with an emphasis on curved products and an eye to an enlarged presence in China's gaming market. 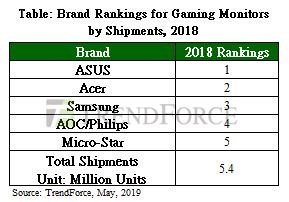