Posted on Friday, May 24 2019 @ 11:53 CEST by Thomas De Maesschalck
TEAMGROUP introduces the T-FORCE XTREEM ARGB Gaming Memory. What makes this memory unique is that it features a "full mirror screen" RGB LED technology implementation. This should look pretty neat:

With creative thinking, T-FORCE XTREEM ARGB Gaming Memory is the first in the industry to feature full-screen independent light module technology. By researching optical principles and light characteristics, the specially designed Addressable RGB LED (Addressable RGB: A single LED capable of emitting colors independently and controlling speed) is used to allow players to change the colors of the RGB lighting freely. T-FORCE XTREEM ARGB is also the first in the industry to feature a full mirror screen. The combination of a special sputtering process and full-screen independent light module technology is capable of directly penetrating and reflecting the optical aesthetics of surrounding products. The mirror design enhances the detail of the texture and innovatively embraces the futuristic aesthetics of gaming memory. The highest frequency of the T-FORCE XTREEM ARGB is up to DDR4 4800MHz, which is specially designed for gamers who wish to pursue ultimate performance.

It will be shown at next week's Computex expo. 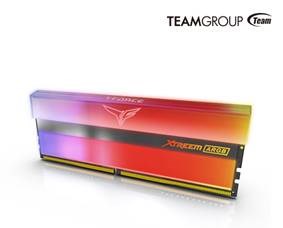