Posted on Wednesday, May 29 2019 @ 13:08 CEST by Thomas De Maesschalck
ASRock went all out with the design of its X570 Aqua motherboard. This limited edition motherboard for the AMD Zen 2-based Ryzen 3000 series will see a production of just 999 units. It's expected to be priced at around $1,000 and it stands out from the crowd thanks to a massive liquid-cooling monoblock that cools not just the motherboard components but also the CPU. TPU has details here.

Beneath the metal shroud is what gives the board its name: a massive liquid-cooling monoblock that cools not just your processor (including heavyweights such as overclocked Ryzen 9 3900X chips, but also the CPU VRM, and the feisty AMD X570 chipset. The coolant channel first goes over the CPU through a large micro-fin lattice, then onto the X570 chipset, and finally over the CPU VRM on its way out. Much like the Phantom Gaming X, this board features daisy-chained dual-channel DDR4 memory slots designed to make the most OC out of 2-module setups. 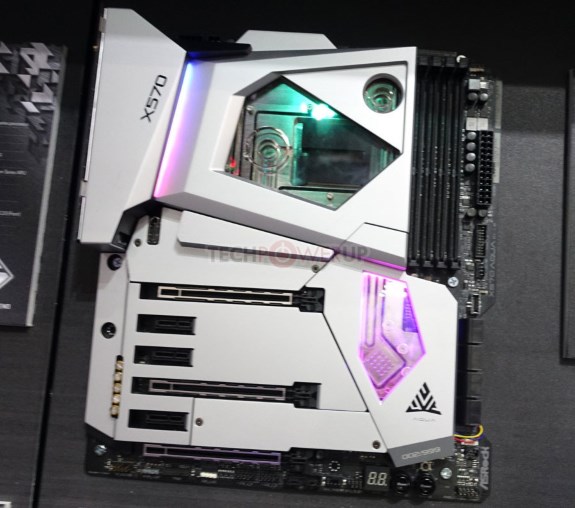