Posted on Thursday, May 30 2019 @ 10:21 CEST by Thomas De Maesschalck
One of the interesting prototypes shown at Computex is the new 120W TDP fanless CPU cooler from Noctua. This product features a copper base block, six copper heatpipes, and a large aluminium fin array with 1.5mm thick fins.

The company demonstrated the prototype with the Intel Core i9-9900K CPU, which has a TDP of 95W. The CPU reportedly ran at a steady 95°C during the hours-long demo, which is probably a lot more than you want your CPU to run at.

According to reports from the show floor the Noctua prototype can passively cool Intel's consumer high-end Core i9-9900K - an octa-core processor which runs at up to 5GHz and has a TDP of 95W. Actually this precise use case was being demonstrated by Noctua "in the hot conditions of the Computex show floor for several hours". PC Mag says it ran at a steady 95 degrees throughout the demo. It isn't clear what tasks the host PC was being put to.

It's the most powerful passive CPU cooler to date, but it does weigh 1.5kg. 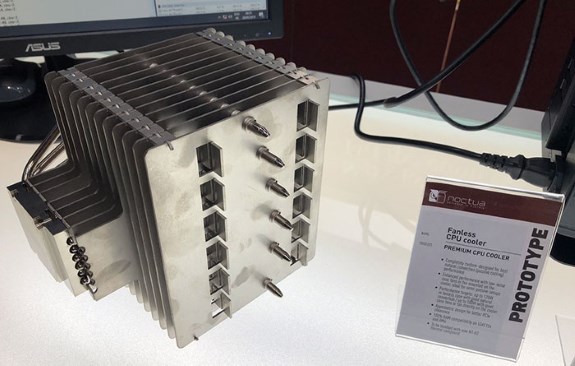