BIOSTAR, a leading manufacturer of motherboards, graphics cards, and storage devices, is proud to launch the latest addition to its 4th generation of RACING motherboards with the compact yet very capable BIOSTAR RACING X570GT. Aimed at gamers who don’t want to compromise on their gaming experience and overclockers looking for that extra push of performance, the RACINGX570GT is the motherboard that supports a lightning-fast and ultra-responsive gameplay experience. The RACING X570GT is tastefully designed with the iconic RACING Gen 4 features and grey lightning strikes that give the users the competitive edge needed to defend themselves in the gaming world.

The BIOSTAR RACING X570GT, equipped with the latest X570 chipset for AMD socket AM4, brings support for 3rd Gen Ryzen processors, and provides PCI-e 4.0, which doubles the bandwidth of PCI-e 3.0. It also supports 4-DIMM DDR4. In order to provide the user with the best compact gaming machine possible, the RACING X570GT also features USB 3.1 Gen1 support (5 Gb/s), PCI-e M.2 4.0 support (64 Gb/s), as well as HDMI 4K resolution. And with overclockers in mind, up to 128GB of DDR4 memory spread over the 2-DIMMs can support overclocks of 4000+MHz for unparalleled responsiveness.

AMD X570 Chipset
AMD X570 is the high-end chipset for overclockers and tweakers who need a robust platform. This chip provides the ultimate low-level control to its users and delivers ultimate graphics card bandwidth.

PCI-E 4.0
PCI-E 4.0 is the next evolution of the ubiquitous and general-purpose PCI Express I/O standard. At 16GT/s bit rate, the interconnect performance bandwidth is doubled that of PCI-E 3.0, while preserving compatibility with software and mechanical interfaces.

Iron Slot Protection
BIOSTAR’s exclusive Iron Slot Protection can reinforce PCI-E x16 slots to handle heavier graphics cards, prevent bending, and extend longevity of the slot, making the new-gen BIOSTAR RACING series motherboard much more robust. It is a necessary feature for content creators to set up the ultimate content creation studio rig and it is also important for gamers who want to play games that need to go heavy on graphics.

VIVID LED DJ
Adjusting the color of LED and changing system colors by VIVID LED DJ gives the users complete control over the process of PC modding, helping to develop their personal style. Users can fully customize the on-board LEDs, as well as the external LED devices such as LED strips, LED fans, and RGB LED memory modules.

RAZER Chroma
Compatible BIOSTAR RACING motherboards utilize BIOSTAR VIVID LED DJ to sync with Razer Chroma. Combined together, gamers can embrace full immersion into their adventures with the systems light synched to the in-game effects, providing instant feedback to every action and event.

A design for gamers
Sporting the unique new RACING Gen 4 grey Lightning Strikes design from BIOSTAR and built on a Micro ATX form factor that can fit in almost every case, the BIOSTAR RACING X570GT is the perfect motherboard for the gamers looking to carry their PC around to LAN parties while keeping a competitive edge with its high-performance features, and create a unique ID for their build with it’s pleasing aesthetics and customizable LEDs. 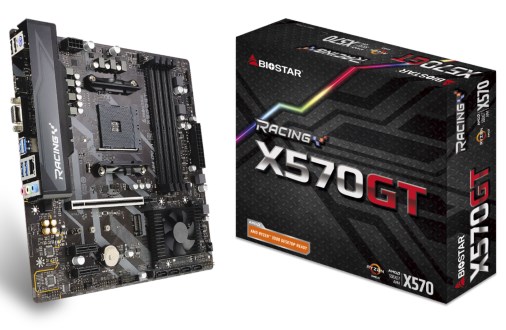