At its EPYC "Rome" server processor launch event, AMD confirmed that its Zen 3 architecture has been completed. The first processors based on this design are expected to hit the market next year. The company is currently working on Zen 4, this architecture is expected to launch in 2021. AMD's goal is to deliver a steady and very predictable launch cadence, kinda similar to what Intel had in place before the tick-tock strategy broke down.

The Zen 3-based processors will be made on a 7nm EUV process, there are no firm details about Zen 4 yet.

The "Zen 4" architecture is being designed for a 2021 market debut, and will come out at a time when the 7 nm process will have matured and attained high enough volumes at TSMC for AMD to either build bigger dies (more cores per chiplet), or leverage the even more advanced 6 nm EUV node. The maturity and volumes of these sub-10 nm nodes could change the economics of the MCM approach AMD is undertaking for its EPYC processors. 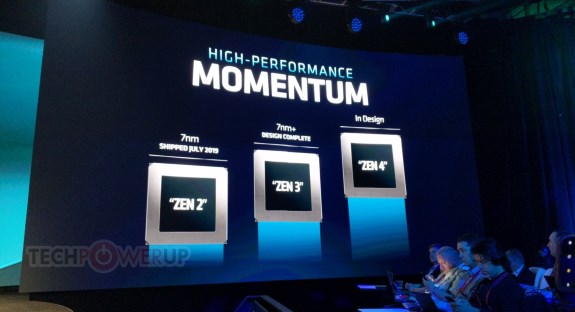