Posted on Thursday, Aug 15 2019 @ 22:38 CEST by Thomas De Maesschalck
Two new mechanical gaming keyboards from Logitech will ship this month. The company has the G915 LIGHTSPEED wireless keyboard as well as the G815 LIGHTSYNC, which is a wired edition. Both are mechanical gaming keyboards with the new high-performance, low-profile Logitech GL Switches. Pricing is $249.99 and $199.99, respectively.

“These new keyboards are perfect examples of what’s possible when our award-winning designers and engineers at Logitech G push the envelope of advanced gaming technology and design,” said Ujesh Desai, vice president and general manager of Logitech Gaming. “The G915 combines LIGHTSPEED Wireless, RGB lighting and amazing battery life in a sleek, ultra-thin, aluminum case that creates a new standard for gaming keyboards.”

For the first time in the gaming industry, Logitech G is offering its next-generation LIGHTSYNC RGB lighting on a LIGHTSPEED Wireless keyboard. With LIGHTSYNC, this keyboard can be personalized across approximately 16.8 million colors through Logitech G HUB Advanced Gaming Software for the most immersive RGB gaming experience. With RGB colorwave enabled, gamers can play for over 12 days on a single charge (assuming eight hours of play per day).

All of these technologies and innovations have been carefully engineered into two of the industry’s thinnest mechanical keyboards and Logitech G’s most advanced mechanical gaming keyboards to date. 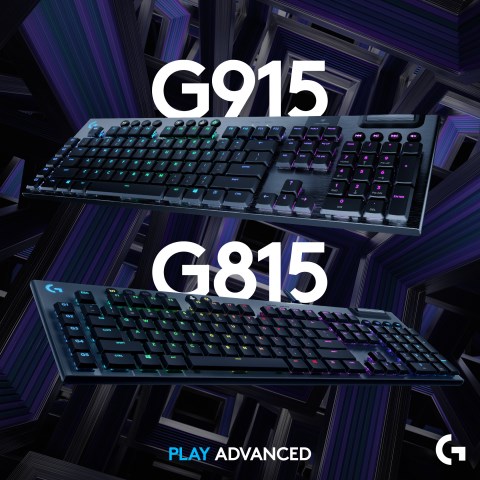