Posted on Thursday, Sep 12 2019 @ 10:35 CEST by Thomas De Maesschalck
A new report by TrendForce reveals that in 2018, Kingston Technology held a marketshare of 72.17 percent in the third-party DRAM module market. This marks the 16th consecutive year that Kingston has the top position as world's largest third-party supplier of DRAM modules. The rest of the market is highly fragmented, with lots of small players that barely have a couple of percentage points of marketshare.

In a press release, Kingston calls the estimates from TrendForce "overly generous":

Kingston Technology Company, Inc., a world leader in memory products and technology solutions, today announced it has been ranked the top DRAM module supplier in the world, according to the latest rankings by DRAMeXchange, a division of TrendForce. Kingston retains its number 1 position with an estimated 72.17 percent market share, according to TrendForce. Their findings reinforce Kingston’s position in the marketplace as the leading third-party supplier of DRAM modules. The rankings for 2018 mark the 16th consecutive year that TrendForce has placed Kingston in the top spot.

TrendForce states that spot prices stayed high in 1H18, even surpassing contract prices by over 20 percent. Despite rising inventory levels and price decreases in 2H18, the report indicates module manufacturers were still able to generate plenty of revenue and profit. Some of the prominent trends and growth drivers the market is witnessing include the growing popularity of online media streaming, recent technological developments in IoT, and the shift to data center and Cloud computing services.

“While Kingston considers TrendForce’s estimates overly generous, it nonetheless follows the trajectory of the company’s growth in all of its business segments,” said Mike Mohney, DRAM business manager, Kingston. “In 2018, we were able to produce over 14 trillion MBs of memory across all product lines including DRAM, SSDs and embedded solutions. This massive amount, tremendous good fortune, and the findings from TrendForce reinforces our company’s strength, position and importance as a whole in the industry.” 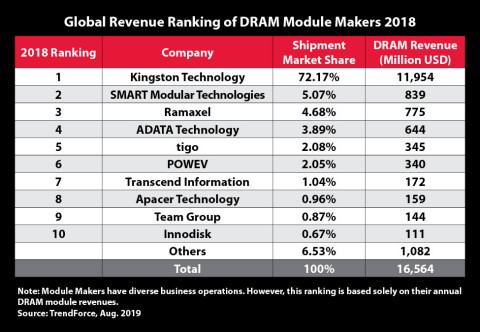