Water detected in atmosphere of K2-18b - exoplanet inside habitable zone

Posted on Friday, Sep 13 2019 @ 10:51 CEST by Thomas De Maesschalck
Over the past couple of decades, astronomers have discovered over 4,000 planets that orbit a star that is not our sun. Space is truly the last frontier, with countless discoveries yet to be made. In the news this week is the first evidence of water vapor in the atmosphere of an exoplanet that orbits within the habitable zone of its host star. Water has been found on other exoplanets before, but never on a planet in the habitable zone.

Using the Kepler space telescope, astronomers discovered the presence of water vapor on K2-18b, an exoplanet that's roughly 111 light years from Earth. The planet orbits a red dwarf star, it's located in the habitable zone of its host star but it's most likely more of a mini-Neptune rather than a rocky planet like Earth. Due to the apparent lack of a surface, this exoplanet is unlikely to be habitable for humans.

As ARS Technica reports, the main news here is that this discovery confirms that Earth isn't special in having water at a distance from its host star where that water could be liquid. That's in-line with expectations, but it's still good to see them confirmed.

So, while the presence of water vapor on K2-18b would probably not tell us anything about the habitability of that planet, it would indicate that water is likely to exist within the habitable zone of other stars, making any planets there worth careful observation. 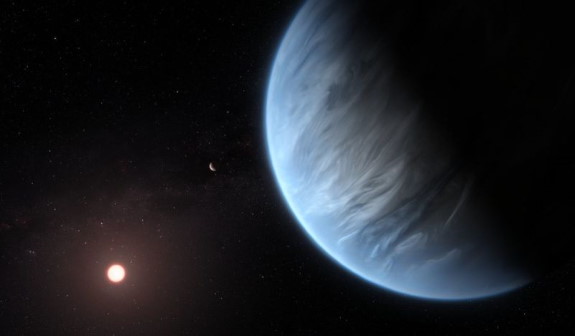