Posted on Friday, Sep 20 2019 @ 08:36 CEST by Thomas De Maesschalck
The arrival of PCI Express 4.0 is enabling device makers to launch solid state disks with speeds never seen before. Gigabyte is now launching its AORUS Gen4 AIC, this product looks a lot like a video card and is housed in a PCI Express 4.0 x16 slot. It features four x4 SSDs and has its own active cooling solution.

Each M.2-2280 SSD inside the enclosure has 2TB of storage capacity and features a Phison PS5016-E16 controller. The result is an 8TB SSD with a bandwidth of up to 15TB/s!

When running in RAID 0 mode, the Aorus Gen4 AIC SSD 8 TB offers up to 15 GB/s sequential read/write speeds, as well as 430K/440K read/write IOPS. It goes without saying that this is a throughput-focused card, as outside of the difficulty in even coming up with that many IOPS in a client workload, RAID modes don't really improve IOPS.

The downside is that there's still no consumer chipset that can accommodate this product. As AnandTech points out, you need 16 PCIe lanes and AMD's Ryzen 3000 platform doesn't offer enough lanes to use both this SSD and a high-end GPU without causing bottlenecks. The next-gen Threadripper may change this. 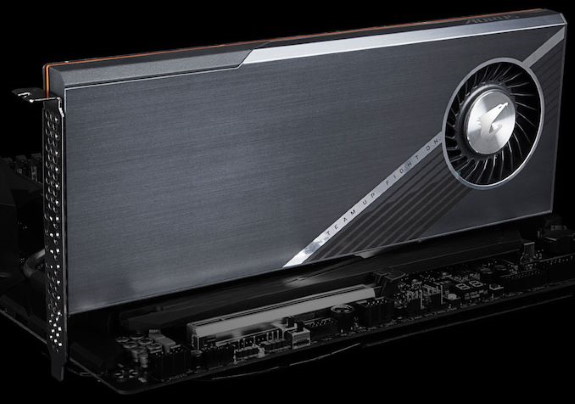