Is our Solar System home to a primordial black hole?

Posted on Tuesday, Oct 01 2019 @ 15:09 CEST by Thomas De Maesschalck
For years, astronomers have speculated about the existence of a large, undetected planet in the outer region of the Solar System. Speculation about this object arose because the unusual clustering of mini planets beyond the orbit of Neptune. The clustering of these trans-Neptunian objects (TNOs) suggests there's a large planet with a mass five to ten times that of Earth, in an elongated orbit 13 to 26 times as far from the Sun as Neptune (or 400-800 times as far as Earth).

Now there's a new study that offers a different explanation. A paper by astronomers Jakub Scholtz of Durham University and James Unwin of University of Illinois at Chicago suggests the mysterious mass we're looking for may not be a planet but a a primordial black hole.

Primordial black holes are thought to have been formed as a result of the density fluctuations in the very early universe. These objects have never been directly observed but scientists believe PBHs with large enough masses may still exist.

Such an object may explain not only the anomalous orbits of trans-Neptunian objects (TNOs) but also an excess in microlensing events. If this primordial black hole exists, it could be orbiting the Sun at a distance 300 to 1,000 times as far from the Sun as Earth. However, due to its small size it will be very hard to discover:

However, it could be difficult to confirm this theory, as such a hypothetical PBH, with a mass of around five Earth masses and a radius of about five centimeters, would have a Hawking temperature of approximately 0.004 K, making it colder than the cosmic microwave background (CMB). Therefore, the power radiated by a typical PBH alone is minuscule, which makes it hard to detect.

The authors of the paper believe the PBH could be discovered by a search for annihilation signals from the dark matter microhalo around a PBH. 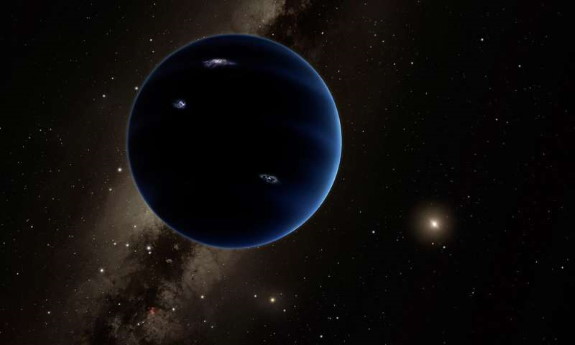