Posted on Friday, Oct 25 2019 @ 16:48 CEST by Thomas De Maesschalck
A couple of weeks ago G.Skill Trident Z Royal DDR4 hit a world record of 6016.8MHz but that's already been bested as Ballistix announces that the ASUS motherboard R&D team used the Ballistix Elite 4000 memory to hit DDR4-6024! The world record was set on an ASUS X570 ROG CrossHair VIII IMPACT motherboard, in combination with the AMD Ryzen 5 3600X and LN2 cooling.

However, the record did not last long. Mere hours after it got submitted to the HWBot database, overclocker OGS achieved 6054MHz at Micron Insight 2019. This overclocking record also used Ballistix Elite memory and was done on the AMD platform. Pretty sweet records!

With the new Ballistix® Elite 4000 memory module, the ASUS motherboard R&D team set a record for the world’s fastest DDR4 memory frequency at 6024MT/s using liquid nitrogen(LN2). This feat was accomplished using the epic combination of: 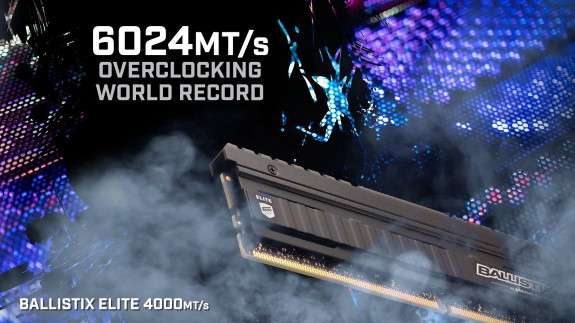