Posted on Friday, Oct 25 2019 @ 18:09 CEST by Thomas De Maesschalck
Micron has launched its first 3D XPoint based product. The company co-developed the technology with Intel, but so far we haven't seen any real products other than the Intel-made Optane series. This changes today as Micron introduces the X100 NVMe SSD, which will start sampling later this year.

The Micron X100 series promises over 9GB/s read and write speeds, up to 2.5 million IOPS, and a latency 11 times better than NAND SSDs. The product is aimed at the datacenter and cloud markets. No word about capacities or pricing, but this should be pretty expensive.

MICRON INSIGHT — Micron Technology, Inc. (Nasdaq: MU), today announced a breakthrough in nonvolatile memory technology with the introduction of the world’s fastest SSD, the Micron® X100 SSD. The Micron X100 SSD is the first solution in a family of products from Micron targeting storage- and memory-intensive applications for the data center. These solutions will leverage the strengths of 3D XPoint™ technology and usher in a new tier in the memory-to-storage hierarchy with higher capacity and persistence than DRAM, along with higher endurance and performance than NAND. 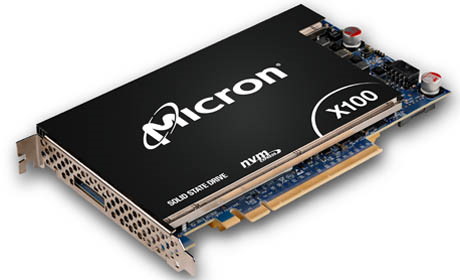 Micron 7300 NVMe Series SSDs
The Micron 7300 NVMe series of SSDs are designed for workloads that demand high throughput and low latency. They are ideal for commonly used mixed read-write, compute and virtualized tasks such as SQL and NoSQL, for hyperconverged infrastructures, and for compute-centric cloud platforms. The use of 96-layer 3D TLC NAND technology brings cost and power efficiencies while the drives offer end-to-end data path protection, power-loss protection, secure firmware and instant secure erase capability.

The 7300 NVMe series come in a wide variety of form factors, capacities and endurance levels. The drives will be available for ordering starting in December 2019. The 7300 series of drives complement Micron’s existing data center portfolio, which includes the high-performance 9300 NVMe SSDs announced earlier this year.

For more information on the Micron 7300 series of NVMe SSDs, including capacity ranges and specifications, visit: https://www.micron.com/products/solid-state-drives/product-lines/7300

Crucial X8 Portable SSD for Consumers
The Crucial X8 Portable SSD, introduced by Micron’s industry-leading consumer brand for memory and storage upgrades, caters to the ever-expanding need for more storage by consumers, who are capturing more photos and playing larger console and PC games than ever before.

The Crucial X8 portable drive delivers impressive performance in a sleek case. With read speeds up to 1,050MB/s,3 the drive performs 1.8 times faster than similar portable SSDs within the same price category and up to 7.5 times faster than portable hard drives. The Crucial X8 is compatible with a variety of devices, including PCs, Macs, PS4s, XBOX Ones, iPad Pros, Chromebooks and select Android devices.

Crucial’s award-winning SSDs undergo thousands of hours of Micron prerelease validation and extensive SSD qualification testing before market release. The drive is drop-proof up to 7.5 feet.4 Crucial X8 is backed by a three-year limited warranty and available for ordering in capacities up to 1TB at crucial.com and through select global partners. For more information, visit: crucial.com/X8