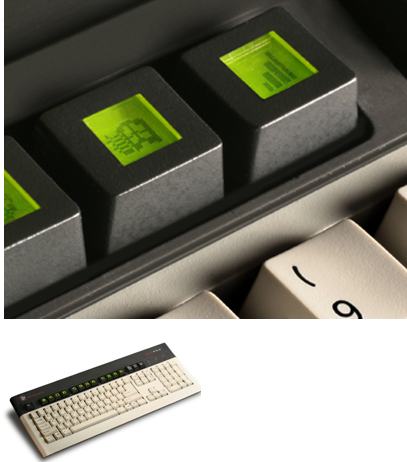 United Keys has presented world's first PC keyboard with user programmable display keys. The 205PRO PC keyboard has small LCD displays embedded in the keytops of all twelve function keys which can be programmed by the user.

The limitation of traditional PC key programming, including “shortcuts,” is that users can’t remember them. As a result, tremendous usability and productivity advantages are lost. With United Keys 205PRO, users or software developers can create custom icons or other images that visually identify complex functions or next steps in software operation. The small displays change dynamically, updating as new software is loaded or new applications within programs are utilized.

The 205PRO keyboard is built by a leading manufacturer using internal metal frames and mechanical keyswitches. The enclosure is heavy and extremely durable. Keytop displays are 20 pixels by 20 pixels, in monochrome. The keyboard runs on USB 2.0, and comes with desktop software featuring a real-time Icon Editor and icon-to-hexadecimal Image Converter.

The 205PRO keyboard offers three options for display key customization. One, users can create icons for shortcuts using the Icon Editor. In this way, they can have icons for shortcuts or macros they create or ones that come with third-party software. Two, Internet sites can embed hexadecimal code in web pages that will automatically launch images on users’ display keys related to site-specific content (in effect, creating “shortcuts for the Internet”). And three, software developers can use a free software API to create key display images that automatically load and display with their program implementation.

The keyboard will be available for $299.99 in the first quarter of 2006. However the Optimus keyboard, which will have a similar pricing, looks a lot more impressive. I think the United Keys 205PRO keyboard looks pretty weird, the black/grey color combination doesn't really match and the monochrome LCD displays look quite old fashioned.