Posted on Monday, Nov 25 2019 @ 20:52 CET by Thomas De Maesschalck
Corsair send out word that it has a bunch of products for AMD's new Ryzen Threadripper platform:

CORSAIR®, a world leader in PC gaming peripherals and enthusiast components, today announced a range of products including liquid CPU coolers, high-frequency DRAM, and efficient power supplies fully tested and validated for compatibility with the new 3rd Generation AMD Ryzen™ Threadripper™ high-end desktop processors. With the highest core and thread count on the HEDT market, combined with the lightning-fast PCI-Express® 4.0 platform, AMD’s most powerful desktop processor can create, composite, render, encode, and deliver with unprecedented multitasking power – and CORSAIR is ready with the widest range of guaranteed-compatible products to help get the best performance out of a new Ryzen Threadripper-based PC.

Threadripper’s impressive clock speeds make a perfect fit with high-frequency CORSAIR DDR4 memory such as DOMINATOR PLATINUM RGB, VENGEANCE RGB PRO, and VENGEANCE LPX. Available in kits of up to eight modules, in a range of clock speeds up to and exceeding 4,000MHz, CORSAIR memory provides guaranteed quad-channel performance and the style to match.

The massive performance potential of Threadripper means the processor also generates large amounts of heat – up to 280W. A high-performance CPU cooler is vital to ensure that your CPU runs consistently at top speeds. CORSAIR offers a wide variety of all-in-one liquid CPU coolers that are out-of-the-box compatible with Threadripper’s sTRX4 socket, such as the Hydro Series RGB PLATINUM, in radiator sizes from 240mm to 360mm, to keep those temperatures down and boost frequencies up.

With their massive number of cores, Threadripper CPUs have high power demands, and users need to ensure their PSU is up to the challenge. CORSAIR offers an industry-leading range of efficient and reliable power supplies, from 80 PLUS Gold® Certified PSUs, such as the RM Series, to the ultra-efficient 80 PLUS Titanium® powerhouse AX1600i.

For those looking to build the ultimate Threadripper system, trust CORSAIR for the quality components to support the world’s most powerful desktop processor. 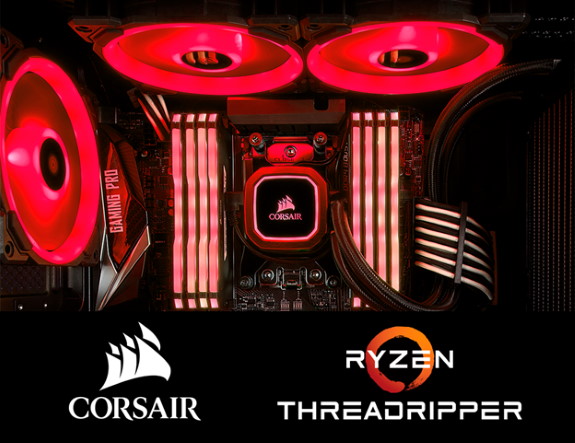