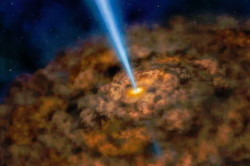 In a paper published in the the Astrophysical Journal, professors from Kagoshima University and Japan's National Astronomical Observatory proposes that planets could form around black holes. According to the nebular hypothesis, planets throughout the universe are formed out of clouds of materials that orbit young stars. But this new paper argues that planets could also form in more extreme conditions.

The paper speculates that tens of thousands of planets with ten times the mass of the Earth could be formed around ten light-years from a black hole:

"Our calculations show that tens of thousands of planets with ten times the mass of the Earth could be formed around ten light-years from a black hole," said Eiichiro Kokubo, co-author of the paper and a professor at the National Astronomical Observatory of Japan. The process is much slower than in traditional protoplanetary disks, however, and could take up to several hundred million years instead of just tens of millions of years.

“Around black holes there might exist planetary systems of astonishing scale," Kokubo added.

More details The Register. At the moment, it's not possible to verify the simulations as there is no known method to study black holes.