A leak from ASRock reveals the upcoming AMD Radeon RX 5600 XT will offer 2304 stream processors. ASRock accidentally revealed the specifications of its RX 5600 XT Challenger, which is a factory overclocked model with a 1235MHz base clock, 1460MHz Game clock, and 1620MHz Boost. The model has a 192-bit memory bus with 6GB GDDR6 memory and a memory frequency of 12Gbps.

There are also some rumors that RX 5600 XT may feature Navi 2x processor, based on refined RDNA architecture. Even ASRock lists the GPU as ‘2nd Gen 7nm GPU’, although this line does not refer to Navi 2x. It is simply how ASRock refers to all Navi graphics processors (1st Gen 7nm being Vega 20 – Radeon VII). 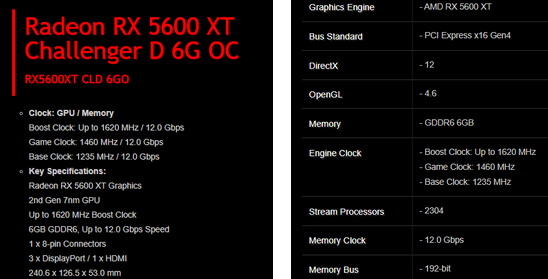