Gigabyte Z490 and B550 motherboards pop up

In the database of the Eurasian Economic Commission (EEC), entries were discovered of upcoming Intel Z490 and AMD B550 based motherboards from Gigabyte. The Z49 0is for Intel's upcoming Comet Lake-S processors while the B550 is the new mainstream chipset from AMD.

So far, we haven't heard a lot about AMD's B550. There were some rumors that the chipset might lack PCI Express 4.0 because the B550A, which is used by OEMs, sticks to PCI Express 3.0. However, AMD technical marketing guy Robert Hallock later hinted on Reddit that the B550 may have a different feature set. As such, we're still not 100% sure if motherboards with the B550 will be able to do PCI Express 4.0 but we should find out soon.

Gigabyte has at least six B550 AORUS motherboards in the making. AORUS is the company’s flagship series, meaning this launch is clearly important to the brand.

Gigabyte will also launch GAMING (X) series for the B550 chipset, these are mid-range series lacking many features that are not really that important to this price segment (after all, you have X570 chipset if you need more ports or visual goodies).

The B550 series from Gigabyte will launch in ATX, Micro-ATX and Mini-ITX form factors. 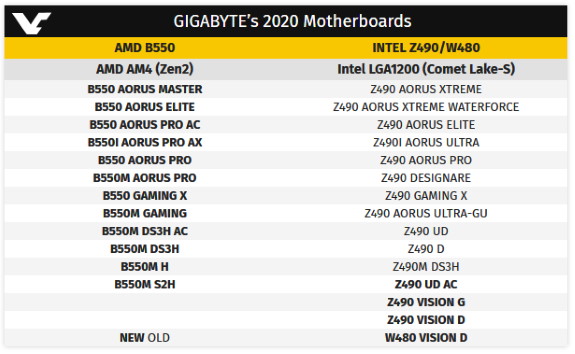