VMware announces a change in the way it will bill its customers. Up until now, the company licensed its virtualization technology based on how many sockets a computer or server has. With the rise of many-core processors, fewer businesses are using multi-socket systems so VMware is adapting by putting a limit on the number of CPU cores you can use with a single license. Starting on April 2, 2020, a single CPU license will cover a maximum of 32 cores. This means that a 48-core or 64-core CPU now needs two CPU licenses.

Q: What is VMware announcing?
A: VMware is more closely aligning to the industry standard of licensing software based on CPU cores as a primary licensing metric. With this change, VMware is still using the per-CPU licensing model, but we will require one license for any software offering that we license on a per-CPU basis, for up to 32 physical cores. That is, the license will cover CPUs with up to 32 physical cores. This change is effective starting on April 2, 2020.

Q: Why is VMware updating its per-CPU licensing model?
A: VMware is working to align our product offerings to industry standard licensing models and projected changes in the hardware market. We cannot continue pricing on a per-CPU basis, where CPUs could have unlimited core counts. The 32-core limit is designed to minimize customer impact given current core counts generally used in the industry, and by the majority of our customers.

Any customer who purchases VMware software per-CPU licenses, to be deployed on a physical server with more than 32-cores per CPU, prior to April 30, 2020 will be eligible for additional free per-CPU licenses to cover the cores on those CPUs. 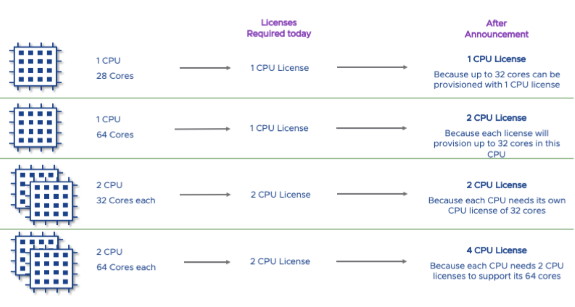