NVIDIA just took its GeForce NOW cloud gaming service out of beta phase. This Google Stadia rival has a free mode and a paid Founders tier. With GeForce NOW, you'll be able to stream games to your desktop PC, Mac, SHIELD, or Android phone. The service starts with Full HD and 60fps support. The games are rendered on NVIDIA's servers so you no longer need high-end hardware to enjoy top-notch image quality.

The free option of GeForce NOW is limited to one-hour sessions. After your session is up, you'll need to reconnect to the NVIDIA server. The paid Founders tier offers gaming sessions of up to six hours and gives priority access to the GeForce NOW servers. Furthermore, the paid option will also give you real-time ray tracing support. The first three months are free, after that you will pay an introductory rate of $4.99/month (5.49EUR/month) for 12 months. That's half the price of Google's Stadia service.

One key difference with Google Stadia is that NVIDIA will not sell games via its service. Instead, GeForce NOW works in tandem with popular services like Steam, Battle.net, Epic Games Store, and uPlay. Games do need to support GeForce NOW, so you'll have to check compatibility.

Funny thing about gamers. They have games. Lots of them. Our GeForce NOW beta members have large libraries. Often 50 games or more. You shouldn’t have to leave them behind.

That’s why we’re working with existing PC game stores and publishers. With GeForce NOW, you can keep playing the games you already own and continue building libraries from the same stores you already use every day. That’s what it means to be an open platform.

If you buy it, you own it. If you already own it, play it. Your purchases are always yours.

GeForce NOW games
GeForce NOW is the only cloud gaming service with access to a wide range of free-to-play games, more than 30 and growing. In total, there are hundreds of games from more than 50 publishers that, once you own, are available for instant play. All these games are patched automatically in the cloud, so your library is always game ready.

While we continue to grow the library of instantly accessible games, there are also more than 1,000 games that can be played through single-session installs.

Games get added to the service weekly based on member requests, game popularity and publishers’ input. If you don’t see a game that you want to play, let us and the publisher know. 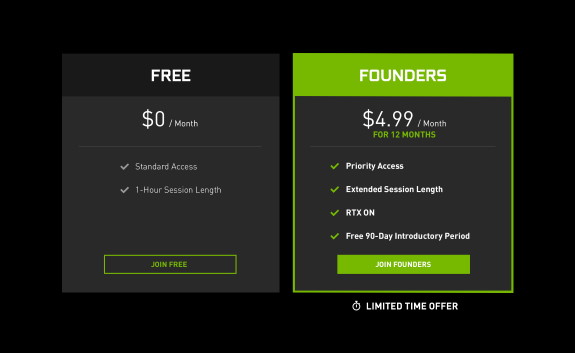